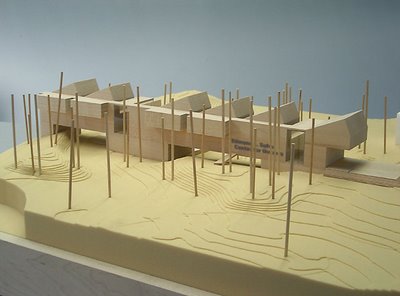 Why do Brandeis’s plans for its Rose Art Museum sound so much like its plans to construct a new art center on campus that were cancelled last fall?

Brandeis announced in 2004 that it had received a $10 million pledge from the Edmond J. Safra Philanthropic Foundation to help build a new art center. The foundation is lead by the late banker’s widow, Lily Safra, a grandmother of students who graduated from Brandeis in 2004 and ’06. She was ranked 746 on Forbes’s list of the world’s billionaires in 2006, with $1 billion.

Renowned architect Moshe Safdie was hired to make designs (his preliminary models are pictured here). The 22,500-square-foot, three-story Edmond J. Safra Center for the Arts was to be erected right next to the school’s Rose Art Museum and include a gallery, student art studios, critique space, a lecture hall and seminar room.

By last March, construction was delayed again, university officials said, because of ballooning projected costs. But work was still expected to begin late in fall 2008 and be finished by late 2009, according to a university update dated Aug. 21, 2008.

But in September, the project was canceled. School officials blamed it on increasing costs. And a university spokeswoman told the Brandeis student newspaper The Justice that Brandeis President Jehuda “Reinharz has to renew his fundraising efforts in order to build a new fine arts center but will not seek a donation from the Safra Foundation.”

So when Brandeis leaders talk of converting the university’s Rose Art Museum into a “fine arts teaching center with studio space and an exhibition gallery” people can’t help thinking that the plan sounds oddly familiar. Is Reinharz sacrificing the Rose to make the Safra Center come true?