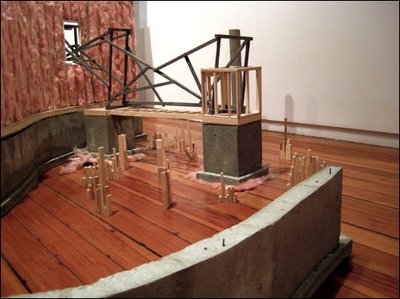 From The New England Journal of Aesthetic Research archives, our review of Jon Laustsen's now closed February show at 5 Traverse in Providence:

Jon Laustsen's sculptures are like a contractor's dreams rendered in miniature. In the Woonsocket sculptor's exhibit "How to Hold On" at 5 Traverse Gallery, concrete foundations seem to have gone feral, slithering around, not ready to support anything. Tiny cinder blocks shore up the fractured side of an actual cinder block. Almost all the room inside the wood framing for a doll-house-scale rectangular tower has been given over to an empty central shaft, for a heating and ventilation system. Instead of being subservient to the occupants' needs, the HVAC system has become the building's primary reason for existing. The sculptures are about the nature of building — and surreal mutations.

Laustsen mates model-making with minimalism. Like a good modeler, he's true to form and construction techniques, but at 1/8-scale. His craftsmanship is routinely superb. Minimalism comes in via his simple forms, often placed right on the floor, and the way his mini-towers approach our own height and so challenge our sense of space and scale.

Architecture has become a prominent theme in art in Providence, with the city's highway projects and redevelopment boom, which has forced artists out of studios in old mills. Laustsen's works reflect the local landscape rife with concrete, rebar, wood framing. They're always under construction. There's something about "Untitled (Corner Install)" (pictured above) with its curving featureless wall that makes me think of Providence Place — but maybe I'm just imaging things.

The pieces here are smaller, more isolated than work he has exhibited over the past year. His elaborate room-filling installation of mini-buildings, including a charred structure, at AS220's Project Space last February drew you in with its sense of ritual and mystery. You wanted to decipher what the purpose of all these structures was. His installation in the show "New Obstructions" at AS220's Mercantile Building last October was a roller coaster-like construction, rising taller than a person, that you could walk through. Its power lay in how it engaged with you physically by taking on your dimensions.

In comparison, his structures at 5 Traverse feel like fragments. They don't grab me in the same way, but they seem to speak more about the nature of building itself.