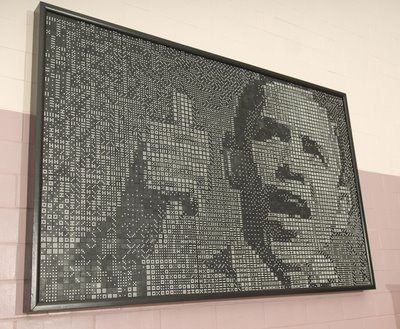 Tuesday, students at Franklin Avenue Elementary School in Westfield, Massachusetts, unveiled a mural of President Barack Obama that they had constructed from 2,420 dominoes.

The project was done in collaboration with nearby Westfield State College, and based on a design developed by mathematician Robert Bosch of Oberlin College in Ohio. The school’s kindergarten to fifth-graders, with help from some Westfield State students, worked on the 4-foot-tall, 6.5-foot-wide mural from March until this month. The “Obaminoes” artwork depicts Obama giving a thumb’s-up during his inauguration in January. The project was somehow related to learning math.

Pictured from top to bottom: The grand mural itself; the June 16 unveiling; and Franklin Avenue first-graders working with volunteer Kris Hedblom on a panel for the mural. The students are, from left, Abigail Parker, Kimberly Otting, Amaya Grabowski and Tim Yurovskiyh. 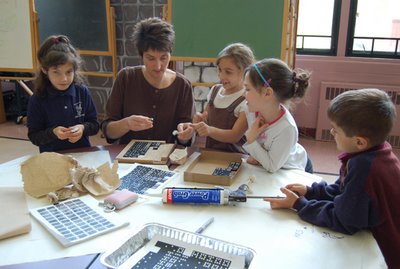 That's awesome. Nobody tell the AP or they'll sue.

That is a really neat piece. Wonder what was the relation to mathematics!

re: Math ...
I'm a little vague about the math here myself. But if you follow the links, it seems like for the younger kids it was doing simple things like counting and grouping. And at the big level, it was the math that went into figuring out the pattern of dominoes that would make the picture.