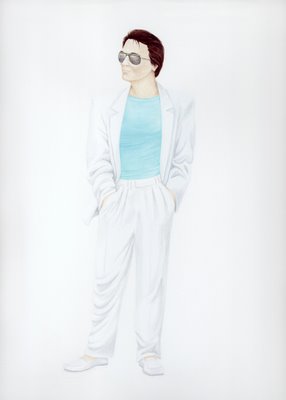 Ria Brodell plays a game of dress-up in her show “The Handsome & the Holy” at Boston’s Rotenberg Gallery. The small pencil drawings and gouaches here feature her “Self-Portrait as a Mountain Man,” as Cary Grant, as Curly from the musical “Oklahoma!,” as Freddie Mercury of the band Queen circa 1985, as Gene Kelly, as Don Johnson in “Miami Vice,” as Prince Charming.

Amidst the wit, the Boston artist who self-identifies as queer digs at something close to the bone. “I grew up watching musicals and old black and white movies with my grandma,” Brodell writes. “I went to Catholic school (picture plaid skirts and itchy tights). Cary Grant, Gene Kelly, ‘Curly McLain’ from ‘Oklahoma!’ were handsome men with perfect hair and perfect features. I wanted to dress like them, dance like them and look like them. I played with G.I. Joe and He-Man. My aunt told me stories about the saints. Catholicism was a significant part of my childhood. I collected holy cards. I collected baseball cards. I only ever wanted one ‘Barbie’ doll, and it was Ken.” 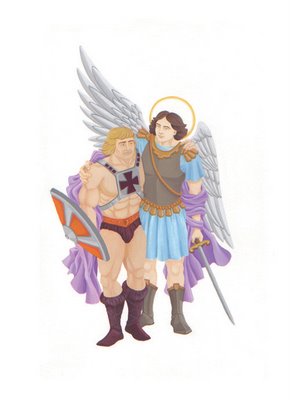 Brodell hasn’t quite figured out how to drive these themes home, but she seems close. There are flaws, like the rascally inventiveness of her self-portrait idea is undercut by a predictable, though I trust heartfelt, trotting out of gay icons. (More interestingly unexpected are ideas like “St. Anthony Finds G.I. Joe’s Gun” and “He-Man and St. Michael Find They Have a Lot in Common.") And her renderings feel stiff, flat. Maybe it’s just that, as the gallery says, these are her first experiments with gouache.

Brodell has better art chops than this show suggests. She showed flashes of an easy, fluid dexterity in her last body of paintings, drawings and sculptures that were featured at Rhys Gallery in November 2006 and then in the spring 2007 DeCordova Annual. In that work, though, Brodell got bogged down in her subject, an invented fairy-tale world of whales, submarines, Wormbunnies, Birdmen, and Sodmonsters intended as an elaborate (and somewhat opaque) fable about war and our stewardship of the earth.

Her subject in “The Handsome & the Holy” is more clear, more funny, more personal, more vulnerable and correspondingly more powerful. And you know she can draw, paint and sculpt. When will she to put it all together? I’m looking forward to her next show. 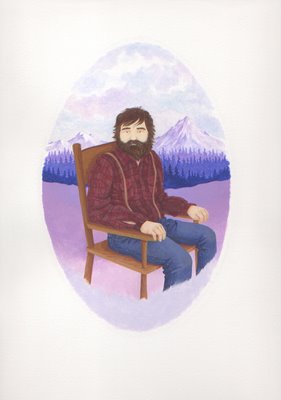 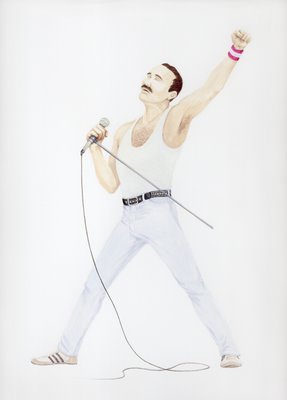 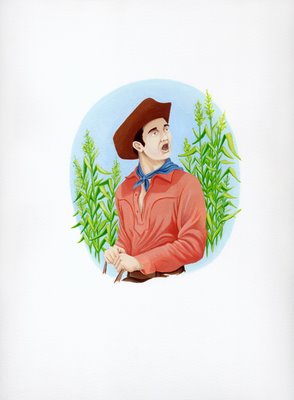