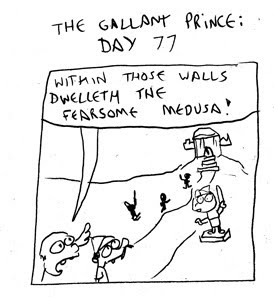 Jef Czekaj, a Somerville cartoonist and indie rocker (and a pal of mine), drew the kids comedy adventure comic "Grandpa and Julie: Shark Hunters" for Nickelodeon Magazine for a decade. He published a "Grandpa and Julie" collection in 2004. But when Viacom started shutting down the magazine this spring, he began sketching “The Gallant Prince,” a series of deliciously naughty fractured fairy tales. Czekaj writes:

“When I heard that Nick Mag was closing, this was the first thing that came out. Something filthy. I drew one strip (the tweedle dee and tweedle dum strip) and I realized that it's a perfect formula. I decided that the only constraint would be that the second to last panel would be the prince thinking. I was definitely thinking about Mad Magazine. Someday maybe I'll draw a ‘finished’ one.”