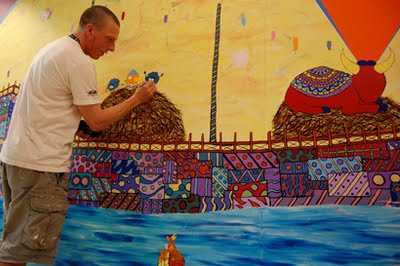 One after another, young patients approach Caleb Neelon as he paints in the lobby of Children's Hospital Boston. They marvel at his folksy, cartoony, Technicolor mural, and offer suggestions. The sea that his patchwork ship floats upon, a boy advises, could use some sharks with pickles.

The piece is called "Imagination Wall," and Neelon is specifically seeking ideas from and interaction with the youth currently at Children's for treatment. The 33-year-old Cambridge street artist has painted walls from Brazil to India to Iceland — with and without permission. "Graffiti is one of those funny scarlet-letter things," Neelon says. "Once you're in it, you're in it forever. Which is fine with me."

Increasingly, though, he is becoming a gallery artist, the sort of respectable fellow who wins grants and commissions ? including previously painting decorations at the hospital's Yawkey Family Inn on Kent Street, which provides housing for families while their children receive treatment. It's an acknowledgement of both his art's charm and the ever-greater official embrace of graffiti.

"I've wanted to do more hospital projects for a long time," says Neelon. "Boston is a good art town, not necessarily a great art town. Boston is absolutely a great hospital city."