“ACT UP” show gets rise from right wingers 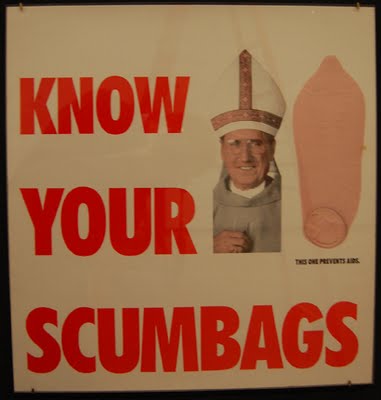 Right wingers are all hot and bothered by Harvard’s exhibition “Act Up New York: Activism, Art and the AIDS Crisis, 1987-1993,” a historical survey of 70 posters, stickers, and other graphics by artists and collectives operating under the banner of ACT UP that pushed for better AIDS treatment and advocated for gay rights. (Read our review of the show here – start halfway down.)

“This exhibit is a window into what the homosexual movement thinks of you, your children, religion, and America,” claims Brian Camenker’s MassResistance of Waltham, Massachusetts. “It involves sexual perversion, child pornography, and anti-Catholic bigotry. And it's what your ‘safe schools’ czar Kevin Jennings supports.”

The Catholic League calls ACT UP a “homosexual urban terrorist group” and the exhibit a “sick display. … Harvard, of course, would never feature a display of Klan paraphernalia and say it was being done for the purpose of ‘dialogue.’”

They get to Kevin Jennings – assistant deputy secretary in the U.S. Department of Education’s Office of Safe & Drug Free Schools – because he seems to have made a gift or grant to support the show. (I’m checking with Harvard to confirm that the Jennings listed as making a gift to the exhibit is the same Jennings.)

A 1989 poster (pictured above) in the exhibit by Richard Deagle and Victor Mendolia takes on the Catholic Church’s stand against AIDS education, condom distribution and abortion. It reads “Know your scumbags” next to images of then New York Catholic Archbishop John O’Connor and a condom. Below the condom it says, “This one prevents AIDS.”

The United Nations and the U.S. Centers for Disease Control say that condoms are highly effective in preventing the spread of the virus that causes AIDS. But during a trip to Africa this March Pope Benedict XVI revealed that the church still hasn't figured this out when he told reporters, “You can’t resolve it with the distribution of condoms. On the contrary, it increases the problem.”

Spreading that kind of ignorance gets people killed.