“In 1935 I spent the first of seven summers in Cape Cod,” the German artist George Grosz wrote in his autobiography. “That landscape with its beautiful high dunes was the exact inner landscape that I had been carrying with me for so long. There it was in real life!”

Grosz tried to become something of a new artist upon emigrating to the United States, to adopt a more jaunty American outlook and become a popular magazine illustrator. “George Grosz: The Years in America, 1933-1958,” a collection of his drawings and paintings that was on view at David Nolan gallery in New York in October, showed how he continued to draw his trademark acid satires, but also, inspired by Cape Cod in particular, attempted semi-traditional landscapes and nudes. And his political work took on new allegorical tones – as in paintings of stick men that are stand-ins for the artist himself – that sometimes turned to treacle.

Grosz had visited New York from June to October 1932 to teach at the Art Students League, then returned briefly to Germany, before sailing back to the United States in January 1933.

“I saw the cracks in the floor, and noticed that this or that wall was starting to wobble,” he wrote in his autobiography of those last days in Germany. “I observed my cigar man was overnight wearing a swastika in the same buttonhole where there always used to be a red enamel hammer-and-sickle.” Back in New York, as Hitler became chancellor of Germany, Grosz received “letters reporting searching for me both at my empty Berlin apartment and my studio. I have reason to believe that I would not be alive, had they found me there.”

His Cape Cod scenes seem an escape from all that. His 1940 oil, gouache and watercolor painting “Artist and Model in the Dunes” (pictured at top) depicts a rosy lady, naked save for a hat, grilling a hotdog over a fire among the dunes as an artist, who is apparently naked too, sketches her. Grosz never seemed to develop in oils the dashing rakish facility he had with drawing and water-based media. His oil paintings feel clotted, curdled and constipated somehow.

The Cape Cod works are rife with naked ladies bending over in the hot sand – a strange combo of cheese and sordidness. Even when his landscapes are devoid of people, like his charcoal and watercolor drawings “Dunes Cape Cod” (1939) and “Cape Cod. Dunes Near Truro” (1940), they seem sexualized, as if among the sea grass and rolling dunes Grosz saw furry lady parts everywhere.

Grosz continued to draw rancid scenes of America and critiques of Nazi Germany, but they often don’t quite have the crackle of his early subjects. That early, post World War I work skewered blundering prideful oblivious greedy political, military and business leaders. Maybe he was just exhausted by the time the Nazis arrived. Maybe his time was past. But I wonder if the out and out evil of the Nazis just flummoxed him.

“When Hitler appeared,” Grosz said in a 1958 radio interview, “I felt like a boxer who had lost. Everything we had done had been done in vain.” 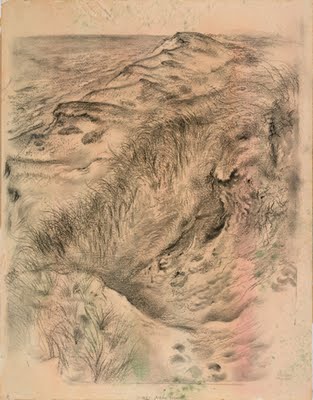 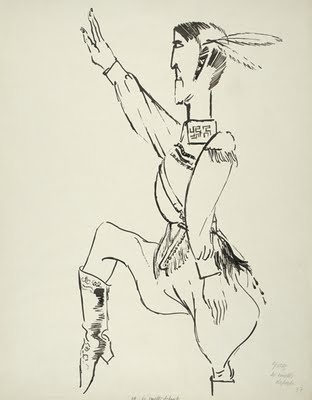 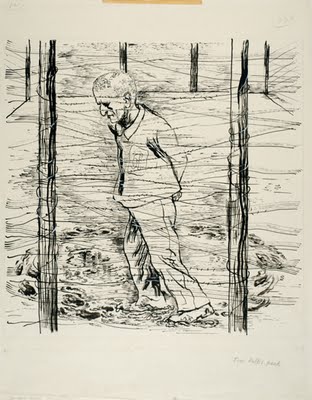