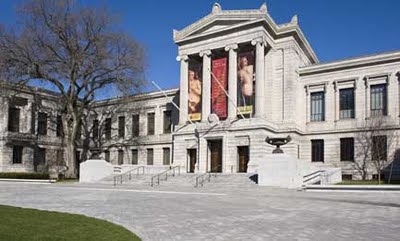 This month marks the hundredth anniversary of the opening of the Boston Museum of Fine Arts’ Huntington Avenue building in November 1909.

The museum first opened in Copley Square in 1876 (pictured at left) in the then recently filled-in Back Bay. But as the enterprise grew and Copley Square grew up around it, the museum looked for a place to expand – and to continue expanding into the future (the MFA’s new American Wing is scheduled to open a year from now) – so it bought land where it now resides on Huntington Avenue.