Pilgrim Hall Museum and the Rock 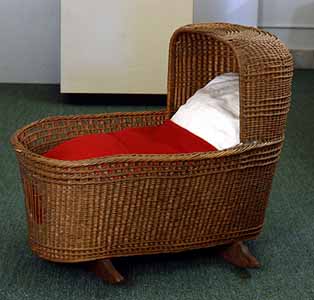 A few blocks up from Plymouth Harbor, at the Pilgrim Hall Museum, you can touch a piece of the fabled Plymouth Rock – greasy black from thousands of fingers that have come before trying to get in touch with history. These days it’s fashionable to assume the Rock is just one more bit of mythology. But if you’re inclined to believe, what you believe is this: The Pilgrims left the Mayflower out in deep water and then came ashore aboard their smaller shallop sailboat. The harbor was shallow and marshy, so the Rock provided a convenient pier to step out upon and avoid soaking your wool clothes. It’s based on a 1741 account from Thomas Faunce.

“It’s our great oral tradition,” museum director Peggy Baker tells me. “But the man who told it was 90 years old. He had known Pilgrims as a young man. So he might have heard it first-hand. We’ll never know.”

Downstairs the museum displays a number of items said to have made the passage aboard the Mayflower. The most striking artifact is a woven wicker cradle (pictured at top) said to have come aboard the ship and held Peregrine White, a boy born aboard the Mayflower in Provincetown harbor in November 1620 – the first English child born to the settlement. It’s end is worn thin by the feet of Founding Babies. It’s literally the cradle of America. 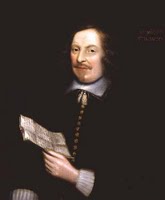 Peregrine White’s father died that first winter. In the first English wedding at Plymouth, his mom Susanna married Edward Winslow (pictured at left), who lost his wife that terrible first winter here. After the English settlers made an alliance with nearby Wampanoags lead by Massasoit, who taught them how to cultivate crops in New England, the colony flourished. Winslow later wrote about the harvest feast that the Pilgrims held with their Native American neighbors that fall, which became a model for our Thanksgiving holiday:

“Our harvest being gotten in, our governor sent four men on fowling, that so we might after a special manner rejoice together, after we had gathered the fruits of our labors; they four in one day killed as much fowl, as with a little help beside, served the Company almost a week, at which time amongst other Recreations, we exercised our Arms, many of the Indians coming amongst us, and amongst the rest their greatest king Massasoit, with some ninety men, whom for three days we entertained and feasted, and they went out and killed five Deer, which they brought to the Plantation and bestowed on our Governor, and upon the Captain and others.”

Edward Winslow would later serve as governor of Plymouth Colony, as would the couple’s son, Josiah (his tiny leather baby shoes are here), who would lead the colony into the 1675 war with Native Americans lead by Massasoit’s son Metacom, also known as King Philip.

Pilgrim Hall Museum displays portraits painted of Edward and Josiah during a 1651 trip to England. Edward, Baker says, is “the only Pilgrim to have his portrait painted from life.” He seems a serious, skeptical fellow with a pudgy face, long hair, a mustache and goatee. Josiah (pictured below) has long flowing hair and a haughty glare in his eyes, like he’s absolutely, arrogantly sure he knows just what he’s doing. 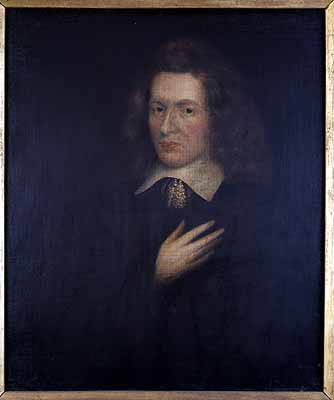