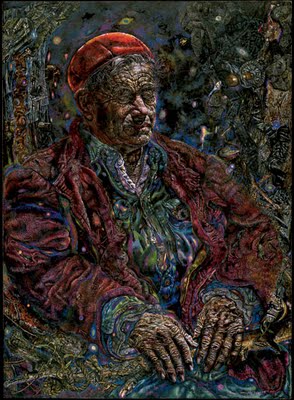 “Make [the head] great; eye sockets that tell the years, folds that bespeak flesh, eyes that bring pity … that have seen better.” – from Ivan Albright's notes on his painting “The Vermonter.”

One of the most extraordinary artists ever to work in New England was Ivan Albright (1897-1983). The painter was born in suburban Chicago and spent much of his career there, but in 1965 he moved to Woodstock, Vermont, where he would live until the end of his life. Albright was a visiting artist at Dartmouth College in Hanover, New Hampshire, from 1969 to ’74, and his style obviously parallels Boston Expressionism, but is generally overlooked in histories of those artists. This may have to do with the fact that Albright usually worked slowly and his most celebrated works were created before his time in Vermont. Though “The Vermonter (If Life Were Life There Would Be No Death)” (1966-77), one of the first works he began after moving to New England, as well as an extraordinary series of portraits he painted of himself as an old man in Vermont in the early 1980s rank among his best work.

“The Vermonter” (pictured here) is a portrait of his neighbor Kenneth Harper Atwood done in Albright’s typically deliciously creepy style of person as decaying flesh. The painting is in the collection of Dartmouth’s Hood Museum of Art, and featured in the museum’s current exhibition “Modern and Contemporary Art at Dartmouth.” Atwood, a 76-year-old member of the Vermont House of Representatives and retired maple farmer, posed for Albright two hours a day for the first few years of work, according to the catalogue for the 1997 Albright retrospective organized by the Art Institute of Chicago and New York’s Metropolitan Museum of Art.

In Albright’s notebooks, he set out his objectives:

“Make the eyes literally move, make mouth tremble. … Make left hand act as if it would rise up … right hand as if it would craw around stick. … Have end of nose literally wiggle. … Have him as spiritual as I can make him but also flesh.”

“Make this painting closer than ever … more real than real so reality seems by comparison a misty dream, an untruth against a truth.” 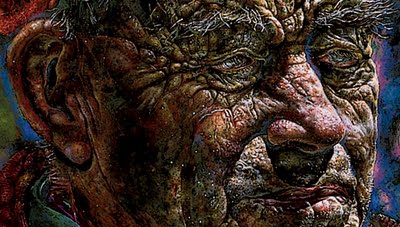 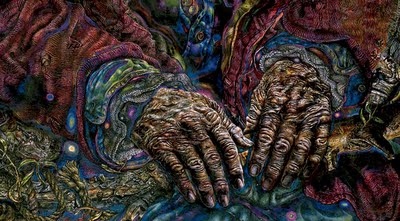 In his gallery talk at his retrospective at the Danforth last Sunday, Gerry Bergstein cited Albright as a major influence.