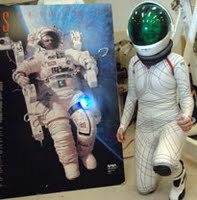 Dava Newman, an MIT professor of aeronautics, astronautics and engineering systems whose “BioSuit,” a form-fitting next generation spacesuit prototype was exhibited at New York’s Metropolitan Museum of Art in 2008, gives a free talk (with refreshments) at the MIT Museum on Tuesday. She will speak about “new technologies, companies, and policies that are leading people back into space, above low Earth orbit. Discuss the issues around space flight from national pride and scientific discovery to wealth distribution and the meaning of being human.”