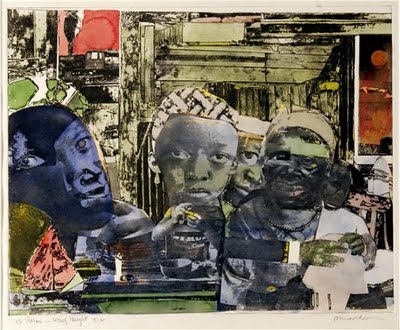 New York artist Romare Bearden’s (1911-1988) first show of his collages in 1964 startled viewers. Visitors said they “were a bit too stark; showed people in their worst or poorer circumstances,” he recalled in a 1968 interview. “An interviewer for a magazine felt that it was a show of head-hunters. … it was frightening to her. Here were Negroes with big heads and something within her reacted to this, you know. They were frightening; they were after her. I told her head-hunters are in the Solomon Islands and these are the people that you must deal with, that live in Harlem.”

That was then. Now what Bearden’s collages are is obvious – striking depictions of 20th century African-American life and among the best art of the century. “Collages by Romare Bearden” presents a selection of 10 works at Bowdoin College Museum of Art in Brunswick, Maine, through Dec. 20. The school is also offering a complimentary exhibition “From Process to Print: Graphic Works by Romare Bearden,” featuring 75 prints through Jan. 3. The art depicted here is all prints from the graphic works show since Bowdoin has no collages available for reproduction, but 1974's "Heavy Freight," at top, gives you a sense of what the collages look like. (I should note there that I'm quite familiar with Bearden's work but unfortunately have not seen the Bowdoin shows.)

The African-American artist was born in North Carolina in 1911, and moved with his family to Harlem, New York, when he was 3, though he also spent significant time with his grandparents in Pittsburgh. He was a child of the Harlem Renaissance. Friends of his parents who dropped by their home on 140th Street included Duke Ellington, Fats Waller, Langston Hughes, W. E. B. Du Bois, and Aaron Douglas. Beginning in 1930, he studied at Boston University (where he pitched on the varsity baseball team and was art director of the student humor magazine "Beanpot"), New York University, with George Grosz at New York’s Art Students League, and the Sorbonne in Paris. When he set up his first studio, on New York's West 125th Street in 1940, it was in the same building as Jacob Lawrence. 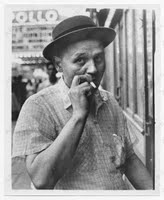 During the 1950s, Bearden (pictured during that time at left) painted in an abstract expressionist mode, but in the early 1960s, as he became involved with black artists engaged with the civil rights movement, his art was transformed. It was the era of 1963’s March of Washington, with Martin Luther King Jr.’s landmark “I Have a Dream Speech,” and that spirit infused his work. He was already in his 50s, but he began making the work for which he would be best known: collages about black life.

Bearden’s sharpest collages riff off images cut out or photocopied from newspapers and magazines. “I chose some of the photographic materials for a certain reason,” he once said. “I wanted to give an immediacy, like a documentary movie.'' At the same time his collages reveal his roots in Modernism, beginning with Cubism and its inspiration, traditional African sculpture. Bearden adds striking shifts of scale that give his work a boppy jazzy rhythm.

His best work can be considered a visual analogue to August Wilson’s celebrated “Century Cycle” of plays dramatizing African-American life in the 20th century. His masterpiece may be his 1978 six-panel drawing and collage “The Block” (not in the Bowdoin shows), an amazing portrait of a Harlem street, which is in the collection of New York’s Metropolitan Museum of Art. It includes glimpses of a funeral, into tenement windows, of a barber shop and a giant mouse trap and a lovers in action. Like all his best work, it is a vivid, gritty, kinetic distillation of life.

Pictured from top to bottom: Romare Bearden, "Heavy Freight," 1974 from the "12 Trains Suite," photo etching with hand coloring; Romare Bearden in Harlem, ca. 1950, unidentified photographer, from the Smithsonian’s Archives of American Art; Bearden's "The Family," 1975, etching and aquatint; "Home to Ithaca," 1979, from the "Odysseus" series, screenprint; "Jamming at the Savoy," 1980-81, etching and aquatint; and "Falling Star," 1980, lithograph. The Bearden art is copyright the Romare Bearden Foundation/Licensed by VAGA, New York, NY. 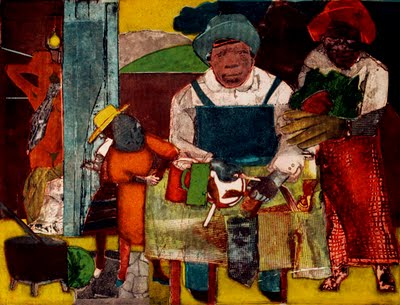 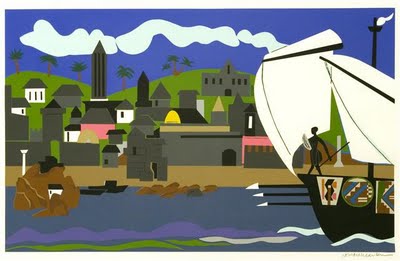 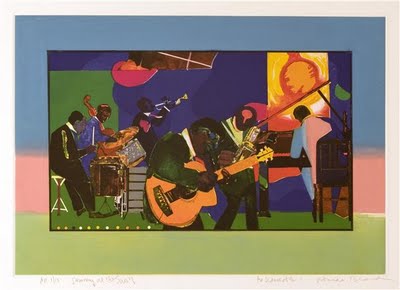 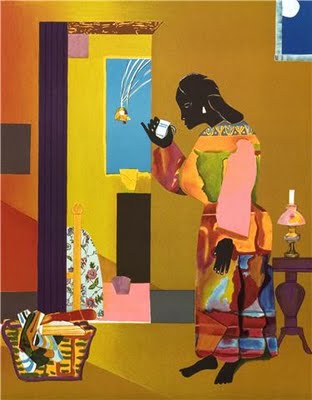