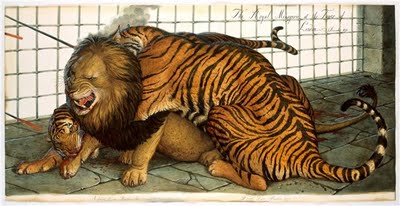 Walton Ford of Great Barrington, Massachusetts, is undoubtedly one of the most extraordinary artists active in New England. He paints monumental watercolors that speak of the meeting of people and animals and how this interaction sets off chain-reactions of disaster. The vividly realistic paintings, with traces of faux aging, resemble 19th century natural history specimen sketches – particularly the work of John James Audubon – but they overturn that era’s sense of the superiority of man to animals, to nature. Ford’s version, as evidenced in his just closed show at Paul Kasmin Gallery in New York, is haunted by today’s looming ecological disasters. The animals are beyond human control. A comeuppance is coming.

However Ford’s historical references can be obscure, which can cloud what the paintings are about. His 2009 painting “The Royal Menagerie at the Tower of London- 3 December 1830” (pictured above) depicts a bloody tussle between two tigers and a lion in some sort of enclosure. Three lines approach the big cats from the left, and approach a cloud of smoke near where one tiger seems to be biting the lion. Some of what’s happening becomes clear when you read the gallery’s description of the painting. It depicts “a historical incident at the royal menagerie at the Tower of London in 1830, two Bengal tigers ensnare a snarling lion as unseen guards attempt to control and separate them with red-hot steel rods.” The scene seems to draw on the specific event to make a point about our inability to control nature. The specificity seems important, but it’s not clear from the painting why this specific incident is recalled. 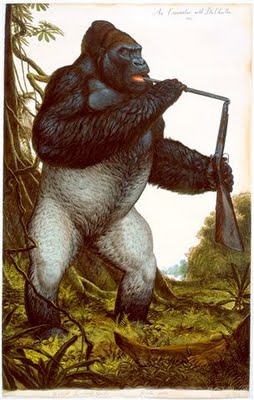 “An Encounter with Du Chaillu” (pictured at left) seems to reference the 19th century anthropologist Paul du Chaillu who claimed to be the first white guy to see the gorillas of central Africa and return to tell the story. And he loved to tell – and apparently embellish – the story. At a New York church in 1875, he spoke of adventures among African cannibals and hunting gorillas. “On the third day he came in sight of a huge warrior gorilla, who was gnashing his teeth in rage as he was endeavoring to tear down a tree covered with berries,” The New York Times reported of Du Chaillu’s speech. “The creature advanced toward him with fierce yells, beating his huge breast with his fists until it sounded like a drum, and evidently was not in the least afraid of the four men. Du Chaillu did not fire until the gorilla was within twelve feet of him, and then he shot him through the heart, so that the creature fell dead before him on its face with a human-like groan.”

De Chaillu told many tales, so I’m not sure what story Ford may be referencing, or how much he might be embellishing himself. In Ford’s painting, a gorilla stands on its two legs and presses the end of a rifle barrel against his tongue as if tasting it. The gun is bent and the butt is bloody. Then you notice that among the ferns at the ape’s feet, lay the battered legs of a person. It’s not clear just what has happened, but the title suggests that this time the gorilla won.

Previously:
Our review of "Tigers of Wrath," Walton Ford's 2006 retrospective at the Brooklyn Museum of Art.

Wow, I love his work, it's so great to discover a new contemporary artist (with the help of your journal). His work is so rich. He obviously puts some complex looking and thinking into it, as opposed to the "one-thought-wonders" one sees so much of these days.