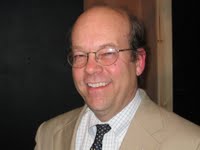 The two staff members of the Massachusetts Advocates for the Arts, Sciences and Humanities (MAASH) are leaving the Boston-based nonprofit to launch their own creative economy consulting firm, departing MAASH Executive Director Dan Hunter announced in an e-mail today.

Beginning in January, Hunter (pictured above) and MAASH Director of Development Hathalee Higgs are forming Hunter Higgs to “provide political strategies for cultural organizations and groups [across the country] to effectively tell their stories to the political world and the broader community.”

Hunter, who has lead MAASH since 2002, has been a major figure in arts advocacy and booster of creative economy initiatives in Massachusetts. In his e-mail, he notes his role in helping get the state to form its cultural facilities fund and the Legislature’s Joint Committee on Tourism, Arts and Cultural Development.

Hunter and Higgs departure would seem to leave MAASH without any staff. Hunter reports that “the MAASH Board of Directors will be reaching out to the cultural community to continue our advocacy and valued relationships and to forge new alliances, new directions and new initiatives.”