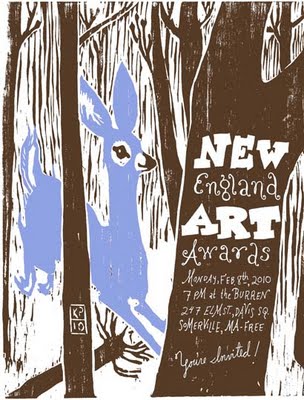 We are very proud to announce that the event will include music by The Second Line Social Aid and Pleasure Society Brass Band of Cambridge, Massachusetts.

The awards are a contest organized by The New England Journal of Aesthetic Research to honor the best art made in New England and exhibits organized here in 2009. More details about how it works here. Below is the final ballot:

Standout work by a local artist in a group show

Solo show of an artist from Away