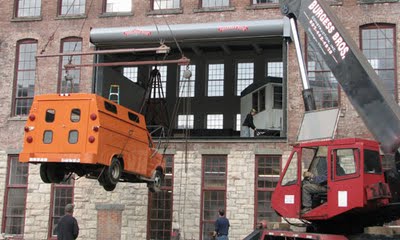 A federal appeals court has ruled Mass MoCA in North Adams may have violated Swiss artist Christoph Büchel’s artistic rights and harmed his reputation by continuing to work on his massive installation “Training Ground for Democracy” over his complaints in 2006 and 2007 and showing the unfinished work to public officials, reporters and others.

The dispute lead to a major falling out between the artist and the museum that exploded from conversations and e-mails into fighting in court and the press.

The Jan. 27 appeals court decision overrules parts of the 2007 summary judgment of federal district court Judge Michael A. Ponsor that, among other things, granted Mass MoCA permission to publicly display the unfinished installation over Büchel’s objections. (Attempting to put the sorry saga behind it, the museum just dismantled the work.) Last week, the appeals court said relevant material disputes of fact should be decided by a jury.

And in an important finding for artists’ rights, the three-judge panel from the United States Court of Appeals, First Circuit in Boston, ruled that the federal Visual Artists Right Act protects unfinished works despite Posnor’s original note that “it is doubtful that VARA even covered the assembled materials that constituted this unfinished installation.”

In a prepared statement, Mass MoCA said: “While we had obviously hoped that this dispute had finally been resolved, should Mr. Büchel decide to proceed further with this case, we are confident that we exercised appropriate curatorial care and diligence in our handling of the work in progress.”

“After careful review of the record, we are persuaded that a reasonable jury could find that Büchel is entitled to relief under VARA based on the Museum's continuing work on ‘Training Ground’ over his objections. Genuine disputes of material fact foreclose summary judgment for either Büchel or MASS MoCA on that claim. We find no merit, however, in Büchel's claim that MASS MoCA intentionally modified or distorted ‘Training Ground’ by covering it with tarpaulins, and we reject as outside the scope of the statute Büchel's claim that the Museum violated VARA by displaying the installation over his objections. … [However, under copyright law] we cannot say that a reasonable jury could not conclude that the Museum violated his exclusive right to publicly display ‘Training Ground for Democracy.’”

“We reject the Museum’s assertion that to find a violation of Büchel's right of integrity in these circumstances would make it impossible for parties to collaborate on large-scale artistic works. The Museum warns that, under Büchel’s interpretation, ‘no one other than the artist himself . . . may ever perform any work in fabricating visual art unless that specific task has been authorized by the artist.’ We disagree. Although the artist's vision must govern, that principle does not prevent collaboration at the implementation level so long as the artist's vision guides that implementation. Here, Büchel alleges a campaign of intentional distortion and modification to his work in which Museum personnel repeatedly ignored his express wishes. Our holding that the summary judgment record precludes an affirmance of the district court on this claim may serve as a cautionary tale to museums contemplating similar installations in the future – guiding them to document the terms of their relationship and obtain VARA waivers where necessary – but it does not prevent museums or other collaborators from working cooperatively with artists on such non-traditional artworks.”