From Boston Expressionism to Lowbrow 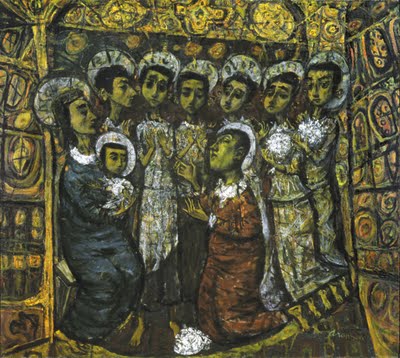 Below is my review of "David Aronson: The Paradox," "Henry Schwartz: The Eternal Footman," "Gerry Bergstein: Effort at Speech" at the Danforth Museum in Framingham, Massachusetts. In it I discuss the connections of art from Boston Expressionism to Lowbrow. I'll be speaking about this subject at the Danforth at 3 p.m. March 21. 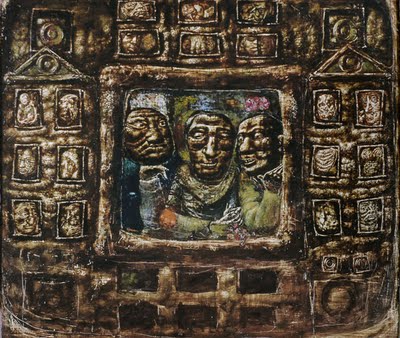 In the 1930s and '40s, Boston painters developed a moody, mythic realism. They mixed social satire with depictions of street scenes, Biblical scenes, and mystical symbolic narratives, all of it darkened by the shadow of the Great Depression and World War II.

It became known as Boston Expressionism, or sometimes figurative expressionism, and it was "for a time the center of this line of [expressionist] development" in America, as Brooklyn Museum of Art curator John Baur wrote in his 1951 book Revolution and Tradition in Modern American Art. The painter Bernard Chaet, who grew up around Boston and taught art at Yale for years, relates how Willem de Kooning told him that when de Kooning and Jackson Pollock discovered Boston Expressionist Hyman Bloom's fiery kinetic paintings of chandeliers and Christmas trees at New York's Museum of Modern Art in 1942, they thought him the first Abstract Expressionist. 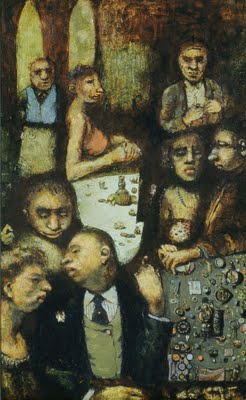 But the Bostonians have come to be left out of today's art histories and dismissed as backward provincials because their expressionist realism did not fit into the triumphant narrative of abstract art — particularly as it was made in New York. "I never delved into complete abstractionism because it didn't speak to me of human experience," Boston Expressionist Henry Schwartz explained last year. (Schwartz, who was born in 1927, died this past February.) "It was decorative. Kokoschka called it 'patches for the pants.' "

Instead, the official version of events goes like this: in 1907, Pablo Picasso and his pal Georges Braque invented Cubism. That launched a fine-art Manhattan Project aimed at breaking down art to its atomic essence — from Pollock's drips to Ad Reinhardt's minimalist black monochromes to Sol LeWitt's conceptual-art recipes for paintings and drawings that might or might not be executed. Yet now, with the rise of street artists like Shepard Fairey (who was featured at the Institute of Contemporary Art this year) and the "pop surrealism" of lowbrow art, Boston Expressionism — which is on display in the shows of Schwartz, David Aronson (born 1923), and Gerry Bergstein (born 1945) at Framingham's Danforth Museum of Art — looks more and more like an early example of a remarkably resilient movement.

Despite being ignored and even discouraged by New York–centered officialdom, the expressionist-realist strain kept sprouting across the country. It didn't matter that the artists remained ignorant of kindred spirits elsewhere off art's beaten path, or that historians failed to connect the dots among related developments in, say, Boston, Chicago, and California. This art remained invisible to most who didn't experience it first-hand in part because the artists themselves received scant national press. But it kept popping up as a genetic mutation in isolated archipelagos, willing itself into existence.

Boston Expressionism bears similarities to the social-realist art of Ben Shahn, to the works of American Regionalists like Thomas Hart Benton and Grant Wood, and to Alfred Stieglitz's circle of European-inspired Modernists (especially Marsden Hartley) of the 1920s and '30s. But the influence of socially engaged German Expressionism — both indirectly and directly via German Expressionist Karl Zerbe, who came to Boston after being driven out of Germany by the Nazis — may be its distinguishing characteristic. And that is what separated it from New York, which favored more apolitical French Cubism, Surrealism, and Dada, with their focus on the formal nature of art.


"David Aronson: The Paradox" is part of a series of Boston Expressionist retrospectives that director Katherine French has organized at the Danforth. It showcases 23 works by the Sudbury painter, who was one of the founders of Boston Expressionism, along with Bloom, Jack Levine, and Aronson's teacher Zerbe. Aronson paints religious and mythic scenes, often in shallow, stage-like settings. "The Resurrection" (1944), pictured at left, his finest work here, depicts a tall, skinny, blue-black Jesus rendered in distorted perspective; he's lying in a coffin and crowned with thorns. All is ashen except for the garland of glowing roses and the bright-blue musician angels floating around the body. What stays with you is that explosion of color and Jesus's fleshiness and serene, tender expression. 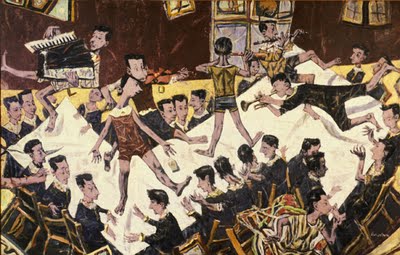 The German influence on Aronson is most apparent in his 1947-'52 canvas "Marriage at Cana," a large busy scene of clowns and carnival barkers that closely echoes the style and composition of German Expressionist painter Max Beckmann's 1942 triptych "Actors." Aronson helped organize a large Beckmann exhibition at the Boston Museum School in 1946. Like Beckmann, he suggests stories in his symbolic scenes, but just what those stories might be remains elusive. 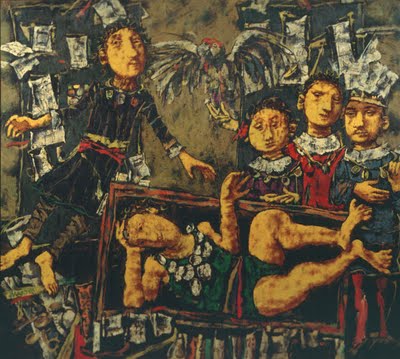 As the years pass, Aronson's scenes take on a soft, shimmering quality and his figures often assume curiously detached expressions, whether they're crowning Jesus with thorns or dancing across a banquet table. Characters in his 1958 painting "The Golem" (above) have lumpy gold faces resembling masks sculpted from clay. The golem seems to lie inside a coffin smiling as a man — a rabbi? — floats in the air at left. Three individuals observe at right. A parrot flaps above the group. Aronson is still dealing with heroic or mythic themes, but the urgency of "The Resurrection" has been pasteurized out. That corresponds with the way the air went out of the sails of Boston Expressionism in general — a development that, in retrospect, one can't help associating with Boston's becoming disconnected from the great art debates of the day. 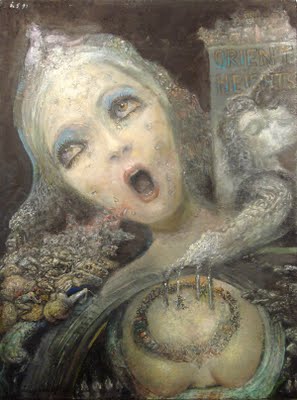 The nine paintings in "Henry Schwartz: The Eternal Footman" focus on his depictions of classical-music concerts and self-portraits (mostly while listening to classical music). Born in Winthrop, Schwartz studied with Zerbe after Aronson, and he was a fiend for classical music, but he wrestled with his favorite German composers' anti-Semitism. He was most interesting when his conflicted feelings led to subject matter like ghouls or scantily clad women — or scantily clad women as ghouls. "Orient Heights: The Spirit of Anne Frank Singing 'Das Lied von der Erde'" (1991) depicts a showgirl or perhaps an opera diva singing Mahler as diamond tears drip down her face. Wraith-like racehorses charge up her arm. Smoking chimneys stand in a wreath upon her bosom, like an apparition of the Holocaust. 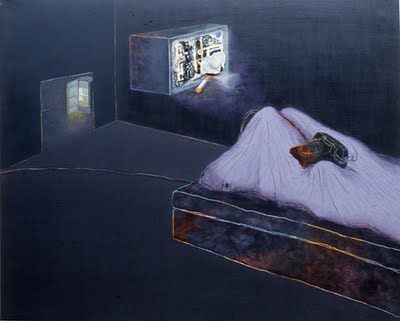 "Gerry Bergstein: Effort at Speech" presents 30 gonzo paintings and drawings by one of Schwartz's students. (More of the Cambridge artist's work is at Gallery Naga, 67 Newbury Street, through December 19.) The Danforth show starts off with 1980s allegories of isolation symbolized by neon-lit telephones in vast, lonely bedrooms. By the '90s, a canvas like "Map #2" (1991) is resembling a jumble of Post-Its stuck on a wall. The parts seem to represent everything that's on Bergstein's mind — doodles of fruit, a chopped-up heart, a telephone pole, a slice of pizza, bones, eyes, fingers, test tubes.

But the history of art is what's most on his mind, and it's rendered with increasingly trompe-l'oeil verisimilitude. "Oops!" (2001) is a painting made to look like a self-portrait cobbled together from a patchwork of doodles and art-history postcards stuck to a chalkboard. His hand holds a paintbrush — made of paint as thick as cake frosting — that seems to have splashed white across the thing, as if it were a parody of Abstract Expressionism. The title and "Oh God" have been chalked in the corners like orgasmic exclamations.

Paintings from the mid 2000s show the artist wrestling with planets or Towers of Babel, as if sheer will could keep the world from disintegrating. Bergstein also assembles tour de force 3-D collages, like Art Broke My Heart (2009), a sculpture of a heart constructed from art-history reproductions and images of fruit and hummingbirds. Sometimes he photographs everything and then reworks the print-outs with paint. I wish he'd take on a meatier subject than sampling art history, but his skill with painting and collage is riveting.

The style of early Boston Expressionism had echoes in the haunted figures — whose flesh seemed to wither before your eyes — that Ivan Albright painted in Chicago during the 1920s and '30s. By the 1950s, a group of dark expressionist realists — dubbed the Monster Roster and including Leon Golub and Nancy Spero — were also active in the Windy City. In San Francisco, the sunnier expressionist scenes of David Park and Richard Diebenkorn typified the Bay Area figurative school.

Today, you might find descendants of Boston Expressionism in Bergstein and in the visionary eccentric-realist art of locals like Raul Gonzalez (at Carroll and Sons, 450 Harrison Avenue, through December 20), Mary O'Malley, Elaine Bay, Resa Blatman (at Suffolk University Art Gallery, 75 Arlington Street, through January 17), Laylah Ali, Derek Aylward, Caleb Neelon, Ria Brodell, and Hannah Barrett. Boston Expressionism is no longer identified by that name — it's traded gloom and doom for sunny pop culture, and the artists themselves may have no sense of being its heirs. But that moody, eccentric strain of expressionist realism continues to thrive. 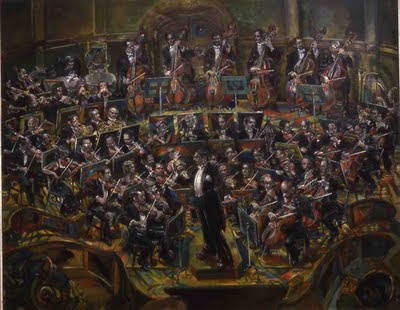 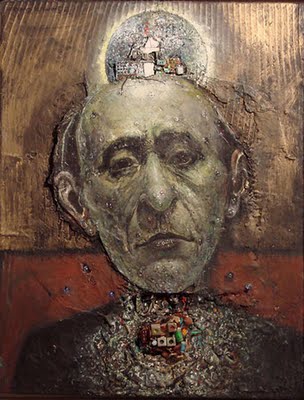 Not bad. Very derivative, but in a good way. Got Byzantine at the top, then Rouault, Chagall below that, you already got Beckman. The later stuff is still OK, but not as good. Passion and its universality is always key especially in expressionist and religiouos works.

It cant be too personal, except in how it triggers similar feelings in us. Self expression is for children, finding what binds us as a common humanity is arts true calling. Got some of that above, not bad at all.