Joan Braderman’s “The Heretics” at ICA 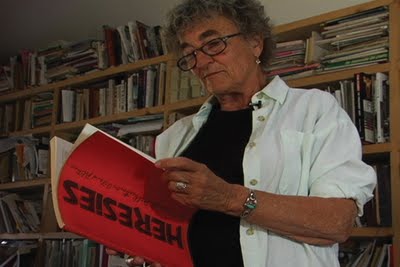 In 1975, a group of women artists and writers got together in New York to forge a response to the commonplace discrimination against women. The painter May Stevens recalled showing her work to a New York art dealer, who told her, “Why does a girl as pretty as you want to paint anyway.” Lucy Lippard (pictured above) recalled painter Mark Rothko telling her, “you’re too cute to be an art critic.”

Many had been active in the civil rights movement, and were energized by feminism. Something needed to be done, they believed, and they had to do it themselves. So they founded the feminist art and politics journal “Heresies,” and produced 27 issues between 1977 and 1992.

Their story is recounted in “The Heretics,” a stirring new hour and a half documentary by Joan Braderman, who now lives in Northampton, Massachusetts, and is a professor at Hampshire College in Amherst. It screens tonight and Sunday at Boston’s Institute of Contemporary Art. 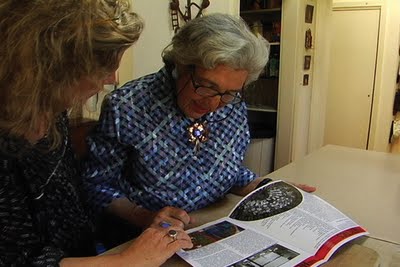 Braderman was part of Heresies’s “mother collective” that came to include critic Lucy Lippard and artists Joan Snyder, Pat Steir, Miriam Schapiro (pictured above) and May Stevens, and many others. “For the first time I really believed you could have a rich, productive and unlonely life without a kitchen and a man at the center of it,” Braderman says in the documentary.

“The Heretics” is a sturdy primer on a major subject, filled with acute observations and remembrances by a large cast of talking heads. But I wish Braderman went into more depth. At the end of the film, one doesn’t have much of a sense of what the magazine was like beyond the overall subject of each issue (lesbian art, sex, “the great goddess,” violence against women, etc.), or its effect. (However Braderman has posted an amazing pdf archive of all the issues at the documentary's webite.) And her own comments – particularly at the very start of the film – are offputtingly cheesy. 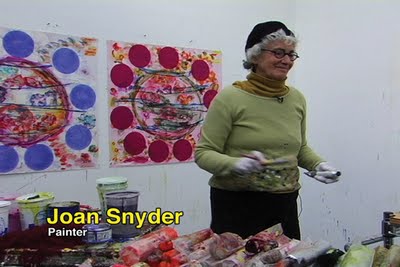 But the film is filled with energy, and inspiration. Feminist art of the 1970s was at the cutting edge of performance, video and body art, and remains highly influential. “I think we pumped the blood back in,” painter Joan Snyder (pictured above) says. “Color field art was so boring. I wanted to be a maximalist not a Minimalist.”

“Everyone is always saying the ‘70s were the non years for art,” sculptor Mary Miss says, “because it wasn’t Pop Art or Abstract Expressionism or Minimalism. And I really think that the women’s movement, that women had a tremendous amount to do with taking everything apart during that decade. And after all that I was a little surprised, I didn’t understand the kind of conservativism that came after the ‘70s. I didn’t really get it. Why are people not exploring all these territories? Knowing these other women who were also taking things apart, doing what you weren’t supposed to do, was an affirmation that you’re not crazy.”

The documentary ends with a sad acknowledgement that, as artist Ida Applebroog puts it, “being a feminist is such a dirty word today.” The film mulls feminism’s legacy. Braderman doesn’t note it, but here in New England, the great majority of curators are women, but men still get more institutional exhibitions.

What’s happened, as Mary Miss begins to touch on, is that many people (including much of the press) became convinced that Lefty protest movements are ineffectual (see Iraq War protests), while Righty protests are highly effective (see Tea Parties). One can’t help wondering how much of this thinking is the result of the Right’s push back after the achievements of the civil rights, feminist, gay rights and anti-Vietnam War movements. Part of the problem today is that many people are simply ignorant of how protest movements function, how much time they take, and their results. For example, many people seem to think that anti-war protests in 1968 immediately halted the Vietnam War – when in fact the war continued for another presidential term and a half. And so people feel that if they go to one protest and the press mainly ignores it and the Iraq War doesn’t end that there’s no point in bothering with such things. Their ignorance of how movements work leaves them feeling hopeless.

Pictured from top to bottom: Stills from “The Heretics,” Lucy Lippard in her studio with the first issue of “Heresies”; Miriam Shapio; and Joan Snyder at work in her studio.