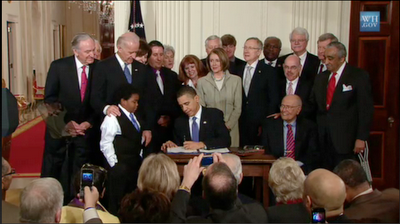 “I'm signing this reform bill into law on behalf of my mother, who argued with insurance companies even as she battled cancer in her final days.” – President Barack Obama upon signing federal health care legislation into law today.

Artists and other creative folks will be among the big beneficiaries of the federal health care bill signed into law by President Barack Obama today.

The federal law resembles in many ways the health care reform passed in Massachusetts in 2006. And in Massachusetts, artists and writers and musicians and actors have significantly benefited from this change. Many of us in the arts just barely get by financially, meaning that many of us have qualified for fully- or partly-subsidized health care under the Massachusetts law.

Artists tend to be free agents, cobbling together incomes from multiple part-time gigs that all too often don’t provide health care. This law helps fill that gap – a gap that art folks like any independent entrepreneurs often face. In doing so it promotes creativity – in the arts, in business, in life in general – by allowing Americans to go out on their own with less fear that they’re risking their lives if they do.