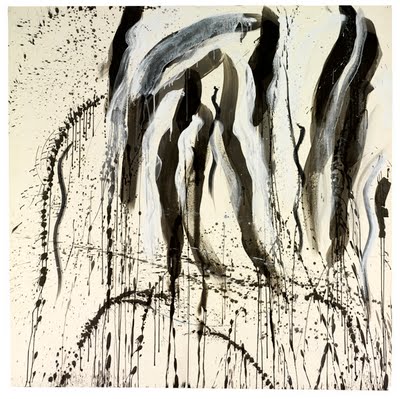 From our review of "Pat Steir: Drawing Out of Line" at the RISD Museum:

The wreckage at the end of Modernist art's main thrust is the starting point for "Pat Steir: Drawing Out of Line," a four-decade retrospective of the New Yorker's drawings at the RISD Museum. Modernism's drive to break art down to its essential, atomic, abstract elements climaxed in the '60s with Minimalism's all-white paintings and giant steel cubes and then Conceptual art's dematerialization of art altogether. Steir is part of a generation of artists who, beginning in the '70s, struggled to pick up the pieces and reverse engineer art again.

Steir's early efforts are often awkward and at times tedious, but RISD curator Jan Howard — who helped organize Steir's last major drawing and print retrospective at the University of Kansas in 1983 — and independent curator Susan Harris assemble them into a sharp, scholarly show, one of the best of the year. And about two-thirds of the way through, it explodes into ravishing beauty. 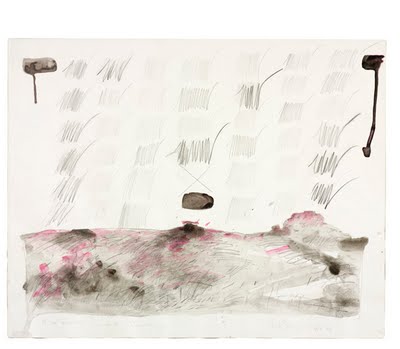 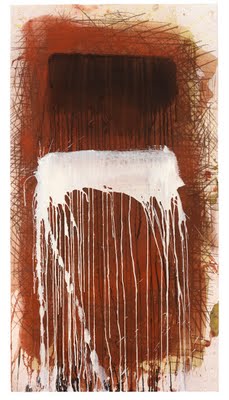 It wasn't the Modern artist who deconstructed art into nothingness, it was the critics and art teachers whose theories were more important than the art itself. Theories are autopsies of things dead after the fact. Braque was creating as vibrant alive, complex and important art in 1960 as 1906, much better actually.

It was the American art schools and critics that drove towards new Ism's, wanting to create categories for treatises and career forwarding articles. They insisted Cezanne's apple be sliced into thinner and thinner slices, till all relationships were lost, the life force of art, in the effort to uncover the "new", and so created signatures instead of living works of art, and the students ate it up. They gladly handed over thousands of their parents dollars to become "artistes".

And so contempt art was born. And true Modernism ignored, only those who had matured before 1960 were "permitted" to show in galleries, and only a very few like Anselm Kiefer allowed to become "stars" in the new field of rich folk absurdist entertainment they spewed forth.

Contempt art is now dead, still born as it was. A theorists nightmare of limited intelligence, and even more limited soul.

Save the Watts Towers, and tear down the Ivories
It is time for adults in art once more.