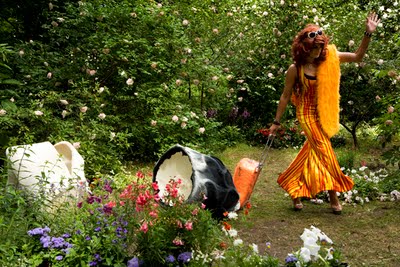 Fantasy is the subject of "Virtuoso Illusion: Cross-Dressing and the New Media Avant-Garde," which closed Sunday at MIT's List Visual Arts Center. (This review appeared in the Fb. 16 Boston Phoenix.) "What is emerging among today's artists is cross-dressing as part of a larger experiment in language and perception" to create "a perceptual jolt to traditional ways of viewing," writes curator Michael Rush, director of Brandeis's Rose Art Museum until last June.

The 17-artist show offers photos of men and women posing as the opposite sex and four and a half hours of videos. Much of it is the usual guys dressed up as gals, from Andy Warhol in lipstick and wig in 1981 to Kalup Linzy's over-the-top 2005 soap opera to John Kelly's deliciously loopy 1993 film "Vander Clyde Becomes Barbette," in which a guy answers an ad to fill an open spot in a nightclub act. But it's a sister act. "Would you be willing to wear a wig?" the ladies ask.

Rush's thesis begins with a 1925 optical-illusion film attributed to Marcel Duchamp's alter ego, Rrose Sélavy. The idea is that taking on this new character provided one more way for Duchamp — and his descendants — to open a trapdoor under what had seemed the sure footing of what art and artists are and what it all means.

This work coincides with a growth of theatricality in art since at least the '70s, from Cindy Sherman to Gregory Crewdson. Rush highlights the gender-bending end of the trend, such as Matthew Barney's epic filmic ode to testicles, The Cremaster Cycle — represented here by a single photo of Barney as a natty satyr drenched in Vaseline. But it all may reflect a general Hollywoodization of art and a return to narrative, with ever bigger budgets and special effects. 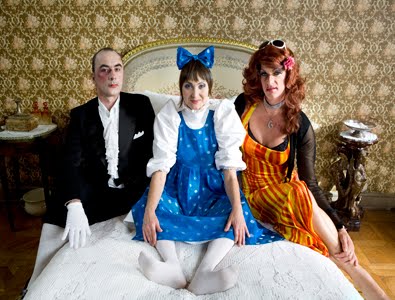 Take Katarzyna Kozyra's 20-minute live-action video "Summertale" (pictured here). Once upon a time, five dwarf ladies lived in a cottage in the woods. One morning, they found a giant mushroom, which hatched a gentleman in a suit, a hussy, and a lady in white. The white lady helped the dwarves in their garden. The man sang. The hussy was revealed to be a man when s/he peed standing up and made a mess on the floor. So the dwarves chopped the drag queen and the singing man to bits with axes. The white lady was tied to a chair and forced to watch. Later, she watched the dwarves tend their garden. Then the dwarves turned into giant mushrooms. The end. Is this about gender? Is it about new experiments in perception? Is it a lavishly produced gothic fairy tale in which cross-dressing is just part of the vivid show(wo)manship?

Can we talk for a minute about whether galleries are better places for video art than movie theaters or viewing at home? The running time of video exhibitions prohibits most viewers from taking it all in. Also, art-world style is to present videos in endlessly repeating loops. Invariably, I arrive somewhere in the middle and spend a long time piecing together what's going on. When it ends, I watch the beginning part that I missed. Or I catch a bit, leave, come back, catch a bit more. The result is that most videos are experienced as Pulp Fiction–like puzzles. Whether that's the intention or not, video art has become mainly about experimental chronology. I'm just sayin'.

Save the Watts Towers, tear down the Ivories