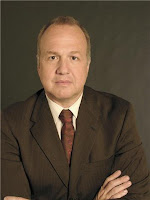 Christopher Bratton, president and chief executive officer at San Francisco Art Institute since 2004, has been named the new president of the School of the Museum of Fine Arts in Boston and deputy director of Boston's Museum of Fine Arts. He is expected to begin work here on July 1.

He replaces Dean Deborah Dluhy who is retiring June 30 after being at the school for three decades, including serving as dean since 1993. The school reports that, "The title was changed from dean to president to more accurately reflect the responsibilities of the head of the school. ... The current dean of the school has been performing as president without the title."

The School of the Museum of Fine Art says in San Francisco "Bratton revitalized the college by initiating new curricula, creating new schools within the college and diversifying funding and supporters. Bratton also increased the college’s global visibility with international partnerships with China, Mexico, Korea, France and Russia."

However Bratton faced criticism after he announced plans last year to lay off nine tenured faculty members, a quarter of the San Francisco Art Institute's total, due, he said, to the affects on the world economic crisis on the school, which also had the school reducing its overall workforce by 10 percent and cutting staff pay. Bratton also shut down a 2008 Adel Abdessemed exhibit at the school, which featured video of animals being beaten to death, because, he told the San Francisco Chronicle, "We've gotten dozens of threatening phone calls that targeted specific staff people with death threats, threats of violence and threats of sexual assaults. We remain committed to freedom of speech as fundamental to this institution, but we have to take people's safety very seriously."

Prior to leading the San Francisco Art Institute, Bratton was chair of the department of video at the School of the Art Institute of Chicago from 1993 to 1995 and from 1997 to 2000, chair of the department of film, video and new media from 2000 to 2002, and dean of undergraduate studies from 2002 to 2004. He previously served as an assistant professor, associate professor and professor at the Chicago art school and visiting professor at Brown University in Providence. Bratton is also co-founder of Video Machete, a community-based youth organizing project in Chicago focused on media and technology-based arts education.