Where is photography now and where is it headed? Those are the mammoth questions that the Photographic Resource Center at Boston University takes on in “PRC P.O.V.: Photography Now and the Next 30 Years.” To mark the center’s 30th anniversary, the institution invited current and former staff, board members and other “luminaries” to pick 31 artists and art entities “that are just getting attention (or deserve more) as well as those that will make a significant contribution over the next 30 years." 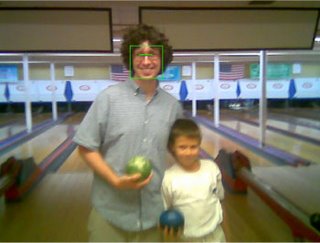 The most intriguing selection is Turbulence, an outfit based in Roslindale and Staten Island, N.Y., that commissions original Web art. Actually, it’s a work Turbulence commissioned that was chosen to represent Turbulence that’s most intriguing. In "Self-Portrait" (excerpt above), New York artist Ethan Ham deploys facial-recognition software to search for his likeness among the millions of photos posted to Flickr.com. There’s a whole – and growing – genre of art that could be called Searching for Signs of Human Life on the Internet. Often this involves artists trawling the net like cockeyed librarians, collecting raw material that they then gussy up for presentation to the non-virtual world. But Ham turns Flickr into his medium. His search program finds resemblances to him in men, women, people of different ages and races. There’s something wonderful and funny, and then forlorn and maybe desperate in this Internet quest for kinship. Often art about the Internet ends up being about the Web as a lonely, alien place. And Ham’s piece has some of that, but it also speaks to how the Web – where we come together in all our random unedited democracy – creates community.

This art points to a new branch of work where artists begin to make sense of the delirious chaos of Flickr, eBay and Adobe Photoshop (three other P.O.V. picks) – that artists will help us find meaning there, not just reflect the bewilderment many feel in our interconnected-disaffected world. The rest of “PRC P.O.V.” suggests that the future of photography will mostly be polished art photos and airy conceptual work, and very little photojournalism. On the whole, this future looks pretty familiar. 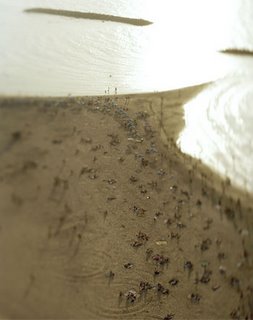 Finnish photographer Miklos Gaál’s “Sunday Afternoon” (2003) is a large unframed color print (left) of tiny beachgoers under teensy blankets and umbrellas on a vast, sunny curve of shore. The scene is shot from high above (echoes of Andreas Gursky) and only a vertical strip to the right of center is in focus, making the place seem magical, and cute, like a dollhouse or model railroad layout. His soft-focus beautiful world photos are terribly charming (in the way that soft photo food photos in a Martha Stewart magazine are terribly charming) – though I’m not sure if they’re much more than that. Perhaps there’s something worthwhile in making the world seem so lovey, small, distant, toylike, because maybe it makes this crazy mixed-up world seem manageable, fixable, improvable – and worth fixing. 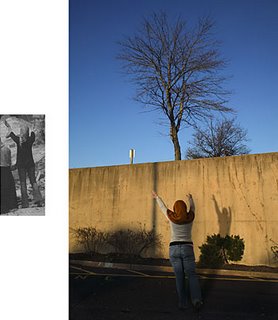 Providence native Karina Aguilera Skvirsky, who’s now based in New York, makes photos by restaging newspaper shots of the Iraq war in her 2006 series “Backyards.” In “Lord & Taylor Parking Lot, NJ” (left) she has a woman in a suburban mall parking lot assume a costume and pose from a New York Times shot of a woman apparently distraught over an Iraq bombing. Skvirsky’s method could help us feel the original images more deeply, or question why many news photos of people facing horrors feel so distant and unmoving – but this image doesn’t resonate. 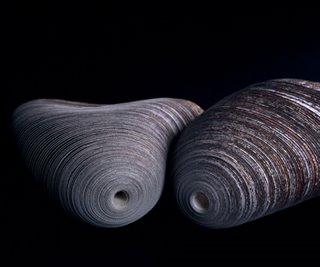 Toronto artist Susana Reisman’s “Photo-sculpture, Rust” (2004-05), winds long strip photographs of some rusty brown thing into an intriguingly weird stone- or breast-shaped sculpture (above). Methuen artist Claudia Saimbert’s 2005 series “Daughters of Eve,” portraits of young African-American women like "Jenny" (below), is familiar way-up-close portrait photography. But it's accomplished work for a college senior (she’s still studying at Montserrat in Beverly). Her subject seems to be how black women’s skin tone affects how they see themselves and how others treat them – an idea with potential, but with only one image here it’s hard to know for sure. 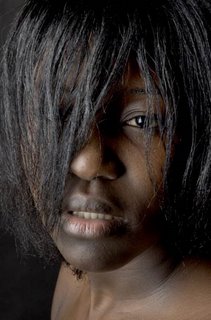