The best show I’ve seen in New England this (still young) year is “Gawu” by Nigerian sculptor El Anatsui (above, standing in front of his 2003 sculpture “Hover”) 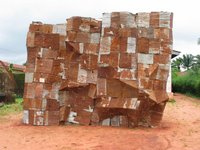 at Dartmouth College’s Hood Museum of Art in Hanover, New Hampshire. In my review, I talk about how he transforms junked milk can lids, printing plates and caps from liquor bottles into dazzling sculptures, often recalling West African ceremonial kente cloth, that speak of the legacy of colonialism and African life today.

Here’s an excerpt from an interview Gerard Houghton conducted with Anatsui in 2003 that is in the exhibition’s catalogue:

This idea of getting a fabric out of metal, it’s interesting to me in the sense that the idea of hardness/rigidity is subverted by having the medium treated that way. Well, and this idea of using drink tops, too. Back home we would characterize someone who is given to the pleasures of drinking and eating as someone who is “building the stomach,” so that kind of idea is somehow behind it as well – the whole piece is talking about “consumption,” or could be seen as referencing it at least. Not consumption as something that is peculiar, in the sense that we are talking about the various landscapes that consumption can create in Nigeria, Ghana, etc. You can have huge piles of detritus from consumption, because you don’t have the technology to recycle and also because of the weather. A lot of things which are made in Europe and America and are sent over, arrive in certain kinds of packaging, for example fresh milk comes in tins. We have our own milk too, of course, but in addition there are huge imports of milk from outside, which is accessed by way of tins. Being that you don’t have the means to recycle there develop huge piles of milk tins, drink tops and all these things all over the place. So it’s an examination of consumption and the various landmarks it can generate in various parts of the world.

Environmental concerns as well as efforts to make sense of our inundating mass-produced synthetic culture have made this sort of recycled-materials sculpture an increasingly common artistic practice. For example there’s Rachel Perry Welty of Needham, who is exhibiting sculptures made from old twist ties

as one of the finalists for the ICA’s Foster Prize; Hyde Park artist Deb Todd Wheeler’s sculpting of plastic shopping bags into utopian flowers in her show at Green Street Gallery in December; New York’s Tom Fruin, who showed quilts made of recycled drug baggies at Judy Goldman Fine Art last summer; and L.A. sculptor Tim Hawkinson, who had a big retrospective at the Whitney in New York in 2005 and whose new show at the Getty Museum includes a bat made from twist ties and Radio Shack bags. 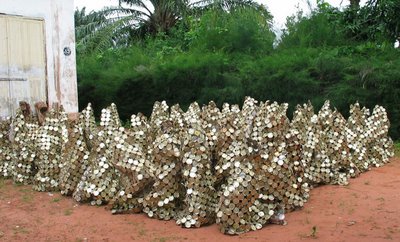