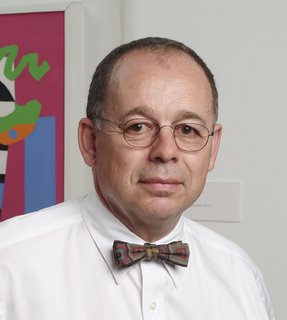 Willard Holmes, director of the Wadsworth Atheneum in Hartford, Connecticut, announced yesterday that he will be leaving his post after leading the museum since March 2003.

"I have accomplished much of what I had hoped to do in coming to Hartford. I have decided to step down as director and allow a successor to develop and implement the next phase of the museum's renewal: developing the program for the Atheneum's main campus," Holmes said in an Atheneum press release. "My plans now are to consult independently on exhibitions and building projects."

Holmes said he’d achieved two principal goals: (a) focusing on the museum’s collections and history and (b) developing what the press release calls “a sound strategy that secures the museum's long-term sustainability.”

Regarding “sustainability,” a plan to expand and renovate the existing Atheneum buildings was killed after Holmes arrived. So Holmes helped lead development of designs for a $15.5 million conversion of the former Hartford Times building behind the Atheneum in downtown Hartford into administrative space, rooms for meeting and educational programs, and a gallery for community art shows. Scheduled to be completed in fall 2008, this project will free up space in the Atheneum’s five linked existing buildings. Long-term plans call for renovating the old buildings, including converting galleries that had become administrative space back to galleries.

As for the focus on the collections and history, Holmes supported plans developed before he arrived for touring shows of the Atheneum’s collection. (The shelved building plan called for the collections to tour while the museum was being renovated and expanded and then return to be reinstalled in the new galleries.) The result was the good “Dalí, Picasso, and the Surrealist Vision” exhibition in 2005, which touted the museum’s pioneering role in embracing surrealist art, and the fabulous “American Splendor” in 2006, which showcased the fruits of the museum’s deep and early engagement with 19th century Hudson River School painting.

Holmes, who was chief operating officer and deputy director of New York’s Whitney Museum and director of the Vancouver Art Gallery before taking charge of the Atheneum, plans stay on as director until his successor is found.