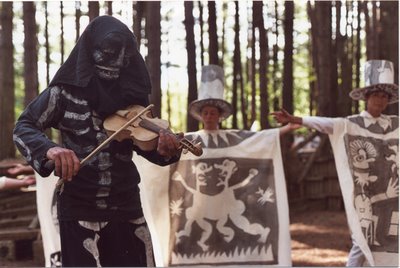 Vermont’s Bread and Puppet Theater is in Boston this week presenting an exhibit of founder Peter Schumann’s art, a family-friendly circus and the not-so-family-friendly pageant “The Battle of the Terrorists and the Horrorists” at the Boston Center for the Arts. Here’s a preview I wrote of the events. I called Schumann at his home in Glover, Vermont, on Jan. 21, 2007. Below are excerpts from the interview focusing on the “Terrorists and the Horrorists” show, illustrated with photos I took of a performance of the show in Glover last August. 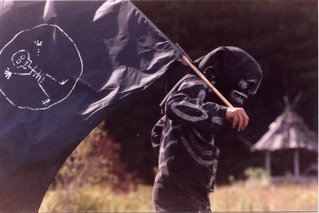 Who are the Horrorists?
Well, I don’t want to totally give it away. You want names? There are about 120 names available. [laughs] ... Here we are in a state after the Communists, we had to look for another big enemy to play out against and here we have them, we’re very happy about that. Possibly we created them ourselves. And we call them terrorists. And the reality is that the guys who are running this game are themselves fairly horrible and we call them Horrorists. 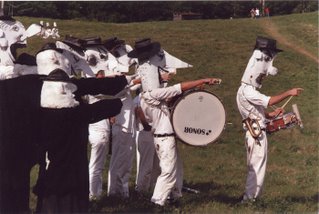 The shows in the first years after Sept. 11 seemed elegies. This one is much more stridently bitter or angry.
Oh, could be, yeah. It’s not only that. It’s also a funny show. You’ll see. It’s born from a big heard of deer that are roaming the landscape. ... And then in finishing up the thing it makes use of the "Popol Vuh," which is the most ancient piece of writing in the Americas. And the "Popol Vuh" is indeed talking about something that amounts to apocalyptic terminology. It’s quite amazingly sinister.

It seems the "Popol Vuh," the way you used it at least, speaks of how people’s abuse of the world curses them to apocalypse.
The role of humans in the world doesn’t look very good in the "Popol Vuh." If you think of the human as another animal, then the animals come out better, most of them, than the humans. And we are using that in this play. We are making people to be again part of that big family of creatures by using the "Popol Vuh," and not being the extraordinary historical thing that they think of themselves. That seems to me a fair assessment that is necessary to make at this point, because our human arrogance after all is maybe the biggest cause of all the harm we do on this earth. Our soloistic thinking, our thinking in terms that we are the exception to the rule, our thinking that we are the extraordinary critters and the other critters don’t count for much, they are just our food or they are just there for our usages. So we are in a very strange position of singling ourselves out from the world as we do. And we have religions that support that very strongly, and these religions have been quite disastrous to us. So at this point it’s probably a good cold water shower for American humans to think about it that way. 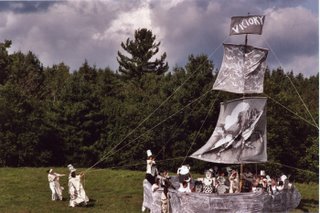 How does the work you’re doing now relate to your earlier work, say your Vietnam work or your work in the ‘80s?
I guess the commitment of being political has intensified over the years, to respond to the political situations. On the other hand we are puppeteers, you know, we are not politicians. We want to make fun of things. And we want to be practicing our art, which is in itself a joyful business and not a sinister business. So we make it into a play that people can take as it is and can interpret as they wish. There’s a lot of openness in there that isn’t didactically telling people how to think it. They still must make up their minds. And it’s an art form that’s forever unfinished, gigantic, like sculpture being made to dance in front of your eyes, language that isn’t anymore in gossip and imitation of everyday language but it’s just concentrated down to bare minimum narrative. 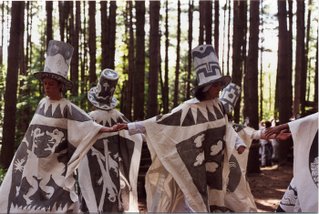 I also feel the recent shows reflect an anger that the same stuff you’ve been fighting all these years or protesting against for all these years keeps coming back again. … You look at the people in charge of the country now and it’s literally the Nixon people who’ve come back.
Oh, yeah. Much worse I think. It’s much, much more serious for the rest of us. Nixon seemed to be an episode. This isn’t an episode. This is not going to be cured by the sort of wishy-washy Democratic measures that the Democrats are now talking about, which are typically not doing anything about the war but just slapping his [Bush’s] wrists or something by making a formal statement against the widening of the war, and in actuality supporting it by giving him the money. This is the kind of horrible situation we are in now. We are destroying these states. We are threatening Iran with war, but meaning it also. Probably trying to cajole Israel into doing it. And then Israel is probably cajoling the U.S. into doing it. So it’s pretty horrible. If that’s done that sounds to me like apocalyptic. And it’s very much, it’s an area that’s possible. 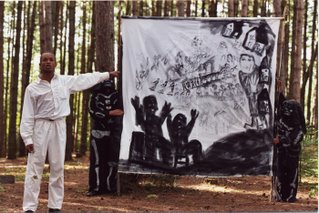 What’s changed in the last few years to cause the company to make this more angry show?
The getting more serious of the situation, I think. Which is a combined seriousness of so many venues, when you think of ecologically what is happening to our earth, and America’s role in that. As well as this war now that the states are pursing. To the fact that we are now a country that actively pursues torture as a means of conducting warfare, getting so-called intelligence. This all, you know, it peaks. Not that the CIA hasn’t pursued this kind of techniques for quite some time, they did, but it wasn’t as visible as all that for us. It was left for South American dictators to do that and we would support them and teach them how to do it. But now it’s obvious that we are admittedly and actively pursuing that kind of medieval warfare. So it is a changed situation, yes. 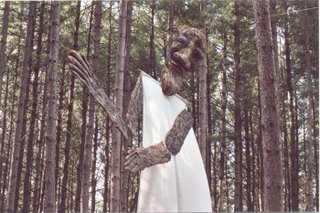 How do you not despair?
Because I’m alive. I have muscles. I jump. I run. I mean, I go up and down the hill, these beautiful black hills. I have a family. I have wonderful family members, including grandchildren. I mean, yeah, I’m lucky.

This statement of Schumann's during the interview deserved some analysis:

While Schumann is talking about a hypothetical attack on Iran in this statement, the actual show Boston show of "The Battle of the Terrorists and the Horrorists" (for which I rehearsed but left as a matter of conscience) strongly insinuated that the invasion of Iraq had been done at Israel's behest (there was a great deal of conflation between IDF and US Armed Forces). This charge is contradicted by a large number of critics of the war within both the Israeli and American governments:

Schumann's "Independence Paintings" conflated Israel's activities in the West Bank (which are not above criticism) with the system of Ghettos that Germany established for the Jews during World War II-- which was so historically innaccurate an analogy that as a matter of conscience, I had to break off my relations with the company, despite years of performing with Bread and Puppet Theater: