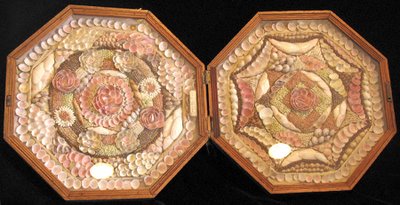 During the Victorian era, New England sailors who made port at Barbados returned home to their loved ones bearing gifts: octagonal shadow boxes the islanders filled with shells arranged in dazzling kaleidoscopic patterns.

At least that’s what people say.

“There isn’t a lick of evidence for any of it, except that some of them were sold in Barbados,” explains Stuart Frank, who wrote the entry on sailors’ valentines for the 2004 “Encyclopedia of American Folk Art” and is a curator at the New Bedford Whaling Museum, where you can see valentines like the one above. 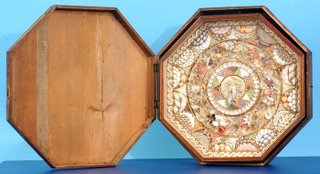 Occasionally the valentines bear shop labels identifying them as having been sold on Barbados. But few records have been found identifying who bought them, or why. Frank adds, “We don’t even know they were called sailors’ valentines.”

Regardless, they’re pretty awesome. And the mysterious origin is cool too.

As I reported last week, collectors have gone gaga over 19th century originals in the past 15 years, with prices now beginning around $10,000. Last August, Hyland Granby Antiques of Hyannis Port sold this one above, which Alan Granby touts for its craftsmanship and rarity, saying, “There is a similar valentine in the Victoria and Albert Museum, London, having been given by Queen Victoria.” 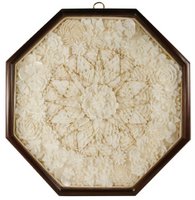 New England artisans have revived the tradition, crafting contemporary sailor valentines. Sometimes they’re saccharine, but some rival the vintage pieces. The Whaling Museum’s store offers contemporary pieces by William Boffa and Diane Lily of New Bedford. (The one, at left, from the museum store is by the curiously named firm Authentic Models.) There’s also SVG (formerly known as the Sailor’s Valentine Gallery) on Nantucket. 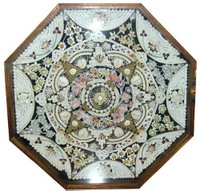 Kahn Fine Antiques in Chatham offers valentines by Gregg Robert of Cotuit (left). In the 2006 book “Sailors’ Valentines: Their Journey Through Time,” the authors report that an auto accident in 1994 damaged his short-term memory, forcing him to give up a career in pharmacy, and prompting him to begin making sailors’ valentines. “I never worry about repeat patterns in my work,” he says in the book, “because I have no recollection of my past valentines.”