Leon Robinson sat in his parked car studying the way the light shined at night from the yellow building at the corner of Boston’s Tremont Street and Mass. Ave. The Roxbury artist made a quick sketch, and then dashed off to his studio down the street to paint the scene while he could still remember just the way the lights glowed inside the corner shop and apartments. And then he returned, finagled to get the same parking spot for the same vantage point, and sketched some more. He pieced his painting together “Check Cashing (Night)” (above) by going back and forth several times.

“This is more of a memory painting than on site,” Robinson tells me.

The painting is featured in “Three: Artists of the African Winter Group” at Boston’s Piano Factory gallery through this Sunday. The show also includes paintings by Laurence Pierce of Dorchester and Richard Waters of Roxbury. The work is uneven, but they’ve got lots of heart. And it provides a glimpse of some of the art being made in Boston outside the Newbury Street-Harrison Avenue galaxy. 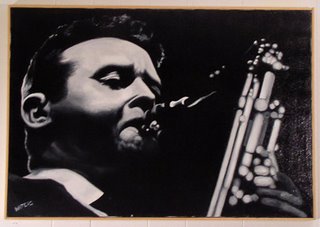 “African Winter” refers to the gallery of the same name that Pierce set up in his basement in 2005 – and which is open irregularly. (I’ve tried going once some months back, but couldn’t get in.) The name has something to do with global warming and environmentalism and such. Basically it’s a collective of Boston middle-aged artists of color with shared Afro-centric interests.

Waters paints faithful black, blue and white copies of photos of jazz greats who inspire him – Nina Simone, Miles Davis, Ray Charles, Duke Ellington, John Coltrane. One of his best is a painting (above) of Stan Getz blowing on his sax. 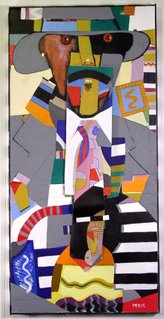 Pierce presents a mix of abstracted images and more realistic scenes that speak of Black pride and African-American history. (At left is his "Man with Loud Tie.") “I, The Queen” and “I, The King” is a pair of standing portraits of an African-American woman and man, crowed with gold bands. The couple’s faces are sculpturally rendered but their outfits are built from flat African-Egyptian-Cubist-type patterns in a palette of bright reds, browns, golds, greens and blacks. It feels a bit like Grant Wood filtered through Klimt. Actually, the artist his stylistic mash-ups most brings to mind is the late Boston-native Lois Mailou Jones.

Of the three, though, Robinson’s work is my favorite. “Mass Ave. and Columbus Ave. 10 a.m.” depicts early morning light raking across a green and red building on that corner. His paintings seem inspired by Edward Hopper. And like Hopper’s work, they’re all about mood – the nostalgia for the light at a certain time of day at a certain street corner you frequent.