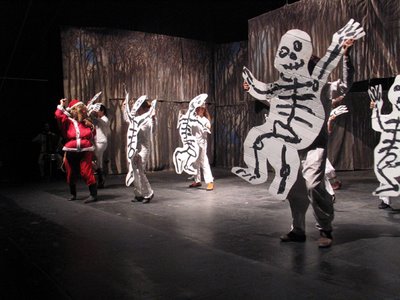 Here’s an excerpt from my preview of Bread and Puppet Theater’s "The Divine Reality Comedy," a reimagining of Dante’s "Commedia" for the “War on Terror” era, which the Vermont troupe is bringing to the Boston Center for the Arts next week:

Dante’s epic begins in Hell and ends in Heaven. Bread and Puppet’s version, on the other hand, begins in “paradise,” home to the troupe’s acid satire of the dehumanizing effects of capitalism in the US today — complete with Santa Claus as the demon god of consumerism. The action lightens briefly with a ballet for cardboard horses. Then the show descends into a purgatory and hell of indefinite detentions, interrogations, and torture. Narrators read US government accounts while puppets and masked actors re-enact the dark deeds.

“I see the cruelty of this society as coming directly from the wonderful philosophy of capitalism,” Peter Schumann, who founded the company in 1962, explains. “I’m saying the School of the Americas and Abu Ghraib and Guantánamo are not ‘rotten apples,’ as Bush called them, but are philosophically correct, pinpointable climaxes of the system, the cruelty of the capitalist system.”

You can read the rest of my essay here. It touches on Schumann’s paintings that have sparked charges of anti-Semitism. More on that here in the coming days.

Bread and Puppet Theater’s “The Divine Reality Comedy” for adults from Feb. 7 to 10, 2008. Also the kid-friendly The “Divine Reality Comedy Circus” on Feb. 9 and 10. And The University of Majd: The Story of a Palestinian Youth, an exhibit of seven large new paintings of his that will hang in the BCA Cyclorama February 4-10. All at the Boston Center for the Arts Cyclorama, 539 Tremont St., Boston. 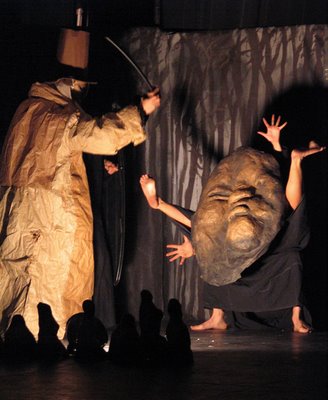