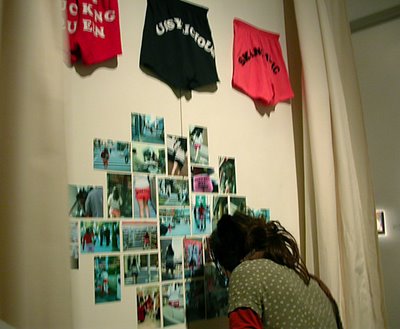 Rachelle Beaudoin, whose work made my best of 2007 list, recently ran into a bump when someone or someones objected to artwork she planned to show in “The Biennial Keene State College Art Faculty Exhibition" in Keene, New Hampshire, where she is an adjunct faculty member. Beaudoin, who resides in Peterborough, New Hampshire, tells me that she worried that because of the concerns raised the college might not let her exhibit her art at all. 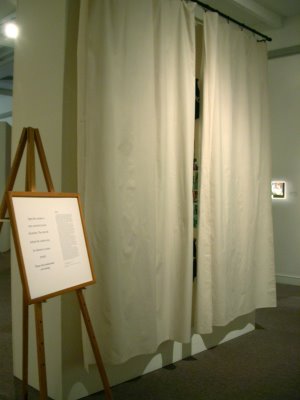 Beaudoin makes funny, rascally, smart, discomforting, potty-mouthed feminist conceptual art. The work in question is her “Cheer!Shorts,” which are sporty shorts with custom slogans printed across the butt like “Unusually Wet Pussy” and “Totally Waxed.” They critique the objectification and branding of women, of girls, as sexual commodities, and how they participate in it by wearing clothes with slogans like “Juicy” that imply what Beaudoin has put bluntly. The piece also includes photos of Beaudoin wandering Providence, Rhode Island, wearing the things. There’s one that’s particularly disconcerting because it shows her standing in line at some fast food joint in front of what appears to be a mother with two young boys. Beaudoin is wearing red shorts that say “Cock Sucking Queen.”

Beaudoin was inspired to make “Cheer!Shorts” when she was teaching art to seventh- to twelfth-graders in Gorham, New Hampshire, a few years ago. A girl came to school in a shirt featuring the Playboy bunny logo, and Beaudoin was troubled by it, and found it hard to get the student to understand what was troubling about it.

“There was no effort to stifle it,” Keene State spokeswoman Robin Dutcher says of Beaudoin’s work. Since whoever is objecting to Beaudoin’s work hasn’t spoken out publicly, it’s unclear exactly what the objection is. But the school became concerned that the work might be pornographic. And leaders were wary after complaints in 2006 about a student’s wire sculpture of a bound woman hanging from a noose that was hung in a public spot on campus. It was apparently about violence against women. The sculpture was eventually removed.

In this instance, Dutcher tells me, “The main thing was that viewers wouldn’t be caught unawares.” 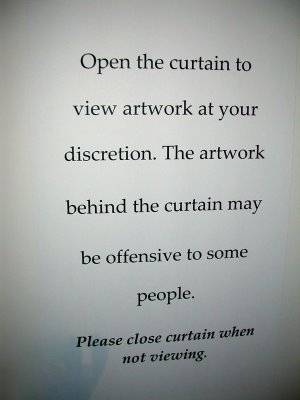 Keene State reached a compromise that let Beaudoin exhibit her art if she kept it behind a curtain and next to a warning sign (pictured here). “My first instinct was that it was funny to have a curtain,” Beaudoin says, “but when I got there I was kind of taken aback.”

“I want it to be out there,” Beaudoin says of her work. The curtain changed the work for her, though, took it out of her hands, changed its tone. And she feels disappointed that the person or people troubled by her work apparently didn’t understand the critique she is making, and didn’t get the joke she’s making. And she feels jarred by the controversy. “It’s always disturbing when something happens to your work that you’re not fully in control of.”

I think it’s a good sign that someone was troubled by Beaudoin’s work because it means that the art is reaching people. And because Beaudoin’s work is troubling. And it’s good that the powers that be found a way to let the show go on anyway. The school’s compromise seems reasonable, if awkward. And funny.

So often art feels as if it’s powerless and inconsequential. Most of the time art stays neatly in the art world, where we’re all trained to handle everything, no matter how consequential or disturbing, with stylish aplomb. But it’s sad when no one seems moved by troubling art. Those who would stifle or censor or shut down or cover up such art acknowledge its power.

The stuff in Beaudoin’s work that has troubled someone in Keene is likely the same stuff that troubles Beaudoin. And this is a good thing. And it’s good that it’s drawn attention to Beaudoin’s subject. I hope people aren’t just shocked and scandalized. Because Beaudoin is scratching at something important, and funny, and troubling about sex and women in our society by saying the words that are implied by this sort of clothing but rarely said outright. 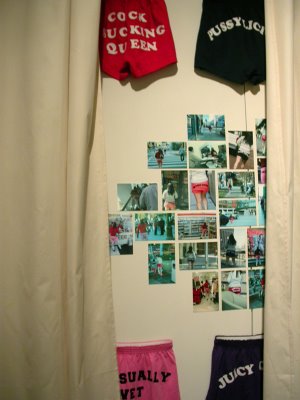