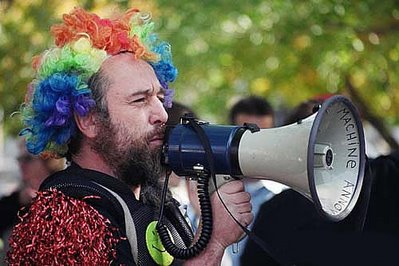 I am happy to report that Vermin Supreme (above) has won 34 votes in the New Hampshire Republican presidential primary, with 91 percent of precincts reporting at 12:27 this morning according to the Associated Press. That amounts to, roughly, 0 percent of the votes cast.

Supreme, a lovable screwball political satirist-artist-activist-dreamer, who, last I knew, was based in Rockport, Massachusetts, is once again running for emperor of the United States. He is known for campaigning in armor and wearing a boot on his head. He says he has run in the New Hampshire presidential primary since 1988. I can attest that he’s been running since I first met him in the mid 1990s.

“I stand for all that is good,” Supreme recently told the Concord Monitor. “My opponents stand for all that is evil. I'm generally most recognized for my mandatory tooth-brushing campaign. I believe that is truly one of the top issues of the day. Of course, I am very well-known for promoting time travel research and zombie preparedness.”

Go Vermin! What happened to his paper vote in Lyndeborough County NH. He got 41 votes total in nh, and I personally witnessed a hand ballot counter telling Vermin and supporters that she saw at least one vote for him, yet there were no votes for him in that county when all were tallied! What happened to that vote? No wonder people are disenchanted with the system. It's not only an outrage, it's a blow to every free voting American in this country!