Note: This list combines best of Boston and best of Providence art lists that I wrote for the Boston Phoenix and Providence Phoenix. With some additions and subtractions.

“The Apartment at the Mall.” On September 26, artist Michael Townsend was stopped by security as he left an apartment he and seven collaborators had secretly created inside neglected storage space in Providence Place’s parking garage. And so was announced to the world one of the most audacious and awesome underground art projects Rhode Island has ever seen.

“The Apartment at the Mall” was a delicious, trenchant, outlaw joke that colonized a bit of the mall to reconsider the place of consumerism and real-estate development in our communities. A recreation of the place was exhibited at 70 Eddy Street in December. For those who have only experienced the original via photos or video, it was an uncanny copy, a kind of proof of the mall apartment’s existence, and simultaneously like walking into a mirage.

What’s next? The artists are creating a book about the project. Townsend says they sold contents of the original apartment — still at the mall — to a Providence collector. The owners of the mall, he says, have made rumblings about suing the artists to seize the intellectual property rights to the whole project and possibly bar them from discussing it. They plan to fight any lawsuit. In the meantime, Townsend hints that he has a couple more off-the-radar spaces under development.

Musée Patamécanique. Word of mouth has turned the Musée Patamécanique, which opened in the fall of 2006, into a cult hit. Hidden on a Bristol estate, curator Neil Salley has built a collection of apparitions and marvelously curious mechanical inventions that beg questions about art, science and the very nature of reality. A garden expansion is next. 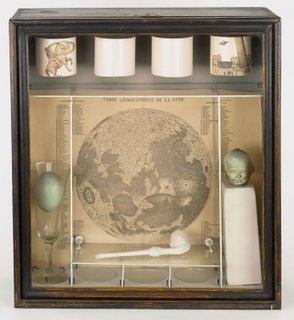 The Peabody Essex’s Cornell retrospective was a thrilling surprise from a museum best known for focusing on New England, the cultures Salem touched via the China trade, and Native American life. Lynda Roscoe Hartigan, a Cornell expert who came to the museum from the Smithsonian in 2003, assembled the best blockbuster exhibit in the region this year, a breathtaking, comprehensive, once-in-a-generation retrospective of Cornell’s dreamy shadow boxes. Is it a sign of what to expect from the Peabody Essex in the future? “It really is about signaling,” Hartigan tells me, “in as direct way as we could think of, that we mean business about doing work in the modern- and contemporary-art arena.” Another signal: plans to hire curators of photography and contemporary art in 2008. 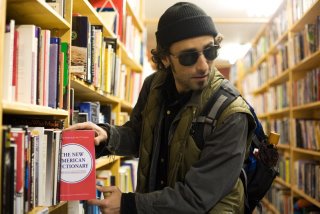 The Institute for Infinitely Small Things’ “New American Dictionary.” For Christmas 2006, the Boston collective The Institute for Infinitely Small Things auctioned off the rights to redefine key terms of the “War on Terror” on eBay. “If we live in a society where a bunch of lawyers can get together and redefine torture,” Instituter Savic Rasovic said, “why not sell it to the highest bidder?” This year they published the revised definitions in “The New American Dictionary: Interactive Security/Fear Edition,” which they spirited onto commercial bookstore shelves in a delicious act of reverse shoplifting. 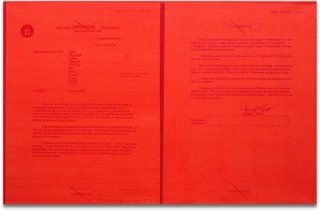 Jennny Holzer, “Archive,” Barbara Krakow Gallery, April 28 to June 6, 2007. For “Archive,” at Barbara Krakow Gallery, Jenny Holzer took declassified government documents from the “War on Terror” and reproduced them straight-up in screenprints, blacked-out passages and all. The texts — especially the testimony of prisoner abuse — were a devastating, and depressing, indictment of the callousness and carelessness of the Bushies. 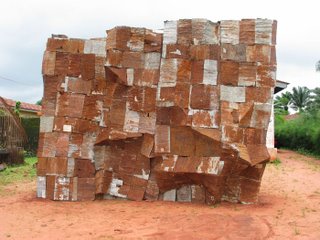 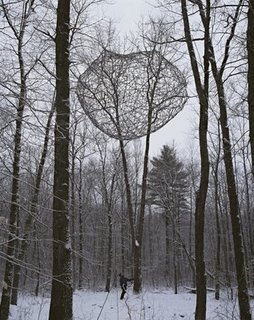 Bruce Chao in “Natured Anew,” Brown University, June 9 to July 8, 2007.
Providence sculptor Bruce Chao has been erecting temporary sculptures high in the canopy of a forest in Seekonk, Massachusetts, for six years, but photos and videos of his boardwalks, webs, and false tree limbs that were exhibited at Brown University’s Bell Gallery in June were his first public presentation of the work. In Chao’s art, treetops became places of visions and dreams. 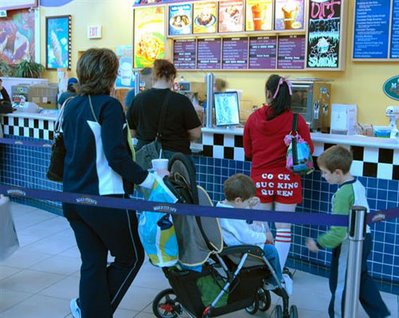 Rachelle Beaudoin in RISD MFA Thesis Exhibition, May 17 to June 2, 2007. For her MFA graduation show at RISD, Rachelle Beaudoin presented photos of herself wandering Providence in Cheer!Shorts with custom slogans across the butt: “Unusually Wet Pussy,” “Totally Waxed,” “Cock Sucking Queen.” It was funny, rascally, smart, discomforting feminist art that asked essential questions about women, beauty, and sexuality in America. She’s since moved back to her home state of New Hampshire, where she’s teaching and keeping up a busy schedule of exhibitions. 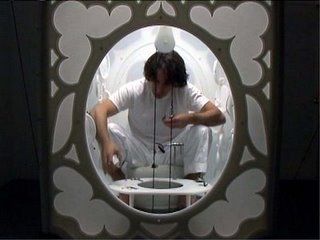 Andrew Mowbray “Bathyscape,” Space Other, May 18 to June 30, 2007. Bostonian Andrew Mowbray’s show “Bathyscape” at Space Other gallery this spring presented a video (exhibited with exquisitely crafted props) in which he climbed into an Art Nouveau diving bell, shaved off his hair, tied the locks into fishing lures, and framed them. Mowbray let the mysteries stew, and the gorgeous strangeness seeped under your skin. Another highlight of Space Other’s year was Erik Levine’s haunting, horrifying “More Man” video, which studied high-school football to plumb rituals of American manhood. 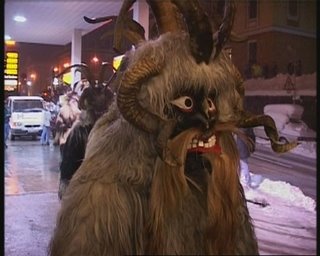 “Cameron Jamie,” MIT List Visual Art Center, May 5 to July 8, 2007. The charms of the “Cameron Jamie” survey at MIT’s List Visual Arts Center were apparent: videos that showed Jamie wrestling a Michael Jackson impersonator, Halloween spook houses, a hot-dog-eating contest, and Austrian Christmas monsters. Jamie recalibrates your vision with his loving anthropology of the weird, messy rituals that squirm under the middle class’s neat social veneer. And did I mention the monsters? 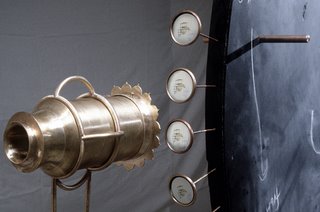 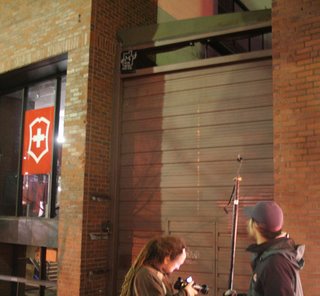 January’s Mooninites invasion is best “art” mistaken for terrorist attack . We’re still thanking our lucky stars that we survived its Lite-Brite-style corporate advertisements colonizing public and private property without permission, the shutdown of Route 93, the bomb-squad heroics, the arrests, the “hairstyles in the ’70s” press conference, and the $2 million corporate apology. Runner-up: September’s arrest at gunpoint at Logan Airport of an MIT student sporting a button that featured harmless LED lights, a circuit board, and a nine-volt battery. 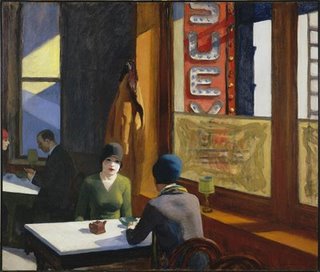 Museum of Fine Arts surveys. The Museum of Fine Arts repeatedly, splendidly demonstrated why its arts are so fine. “Edward Hopper” brought together many of the painter’s lonely film noir masterpieces (above). The museum drew exclusively from its own collection of ukiyo-e paintings of performers, escorts, and high-end prostitutes for the terrific “Drama and Desire: Japanese Paintings from the Floating World 1690-1850.” And “Symbols of Power: Napoleon and the Art of the Empire Style, 1800-1815,” on view through January 27, is a magnificent survey of the French style of design — by turns spare and opulent, revolutionary and imperial — that spread across Europe during the reign of the great dictator. 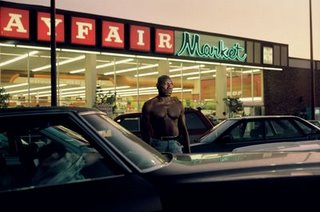 “Philip-Lorca diCorcia," Institute of Contemporary Art, June 1 to Sept. 3, 2007. This was a handsome, smart, thorough mid-career survey of a major American postmodern photographer. The best part: moody, lovely “Hustler” photos (above) of real prostitutes posed in manufactured set-ups. It looked like a documentary about prostitutes; in fact it was a documentary about Hollywood myths of prostitutes. 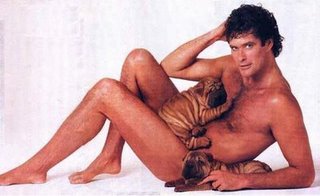 James McLeod in “Selections ’07,” MassArt, 621 Huntington Ave., Boston, Jan. 30 to March 10, 2007. McLeod stole the show at MassArt’s faculty exhibit “Selections ’07” with a shrine to TV, uh, legend David Hasselhoff. Ingredients: red velvet ropes, a carpet printed with photos of Hasselhoff dashing through surf and reclining naked, and plaques inscribed with weighty pronouncements from, it seemed, the man himself. (These included the claim that “Baywatch” “is responsible for a lot of world peace.”) Certainly the installation plumbed something important about our national psyche. But analysis dims its brilliance. The title: “Don’t Hassle the Hoff.”