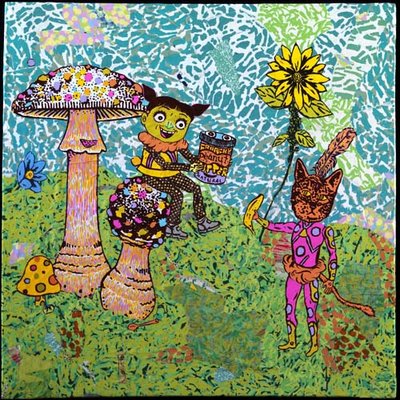 From my review of “Human Mold: New Growth by Brian Chippendale” at Stairwell Gallery:

A blue papier-mâché cathead-lady in a yellow suit occupies the window of Stairwell Gallery for Brian Chippendale’s new show “Human Mold.” She stands between a pair of little pyramids, and before a gumball-headed papier-mâché guy seated atop a giant papier-mâché mushroom. The cat-lady’s arms are outstretched as if offering a hug of welcome to the Providence artist’s scrappy DIY, rainbow bright, patched-together, cute brut, nostalgic storybook fantasy land.

A few years back, Chippendale, a co-founder of Fort Thunder and half of the noise rock duo Lightning Bolt, was making surreal art allegories of Providence’s gentrification and our post-9/11 world — sinister developers, burning homes, wild soldiers, a derelict Humvee, people cascading out of a cracked and flaming jetliner. His collages here are less political, but still seductively strange. And he’s mastered his technique. It’s a great show.

Coming soon: A two-part interview with Mr. Chippendale and a photographic tour of his studio. 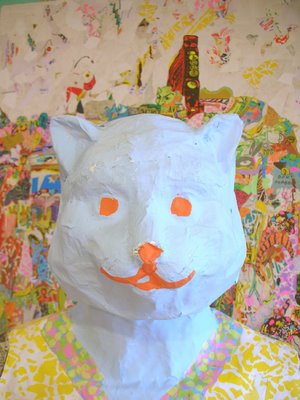 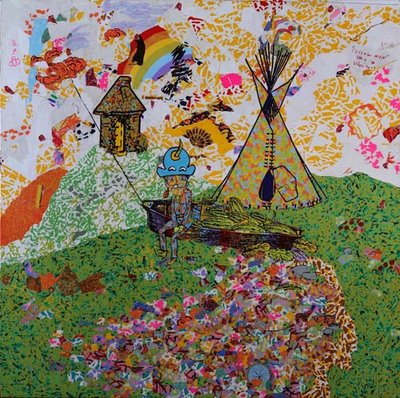