Construction at 460 Harrison Ave. behind schedule 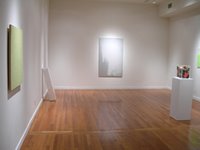 Howard Yezerski Gallery’s move from Newbury Street to 460 Harrison Ave. in Boston appears to be delayed because GTI Properties’ renovation of the building is behind schedule, Yezerski says. He had planned to be in the new space at the start of next month.

“We just found out that it doesn’t look good for September because the windows aren’t going to be in,” Yezerski tells me today. “I’m hoping it’s just going to be a couple weeks [delay].”

At the end of June, Yezerski moved out of 38 Newbury St. (pictured above) and moved into temporary space in unit 201 of 450 Harrison Ave. He says he planned to move into 460 at the start of September (which would have slightly more space than his Newbury Street gallery at roughly half the cost), finish a build-out, and present an exhibit of work by Lalla Essaydi the following month. “Realistically we weren’t thinking of opening till October anyway,” he says.

Yezerski says his lease with GTI promised that he could move into the new space by Sept. 1 or he could occupy his temporary space rent free until 460 Harrison is ready for him. “We won’t have to be paying rent after Sept. 1. Not that I’m particularly thrilled about that,” he says.

“We actually are delivering most spaces [at 460 Harrison Ave.] for Sept. 1. Some people have more elaborate build-outs that will take longer,” GTI commercial leasing director John Kiger tells me today. “We’ve always represented that we will deliver the vanilla box on Sept. 1, and that’s going to happen.”

In March, Kiger told me, “I think this year we’d bring on something like 10 to 15 more galleries [to 460].” Some dealers were skeptical of that number then. And since the start of the year at least 11 Boston-area galleries have announced plans to close (at least temporarily) and additional galleries are restructuring. Today, Kiger maintains that, in addition to Yezerski, other galleries will be moving into 460, but he declines to name them. “That wouldn’t be fair to them,” he says.

Yezerski has operated a gallery in the area since 1968, when he and David Sullivan opened Andover Gallery in Andover. He took over operation of the gallery in 1971, and then moved to 186 South St. in Boston in 1988, 11 Newbury St. in 1993 and 38 Newbury in 1998. Since moving into his temporary location at 450 Harrison Ave., he says he has continued doing business. “Thank God for the Internet,” Yezerski told me in July. And he was fond of the new neighborhood: “I like the energy.”