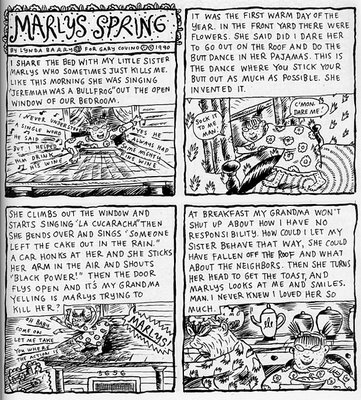 Lynda Barry of Wisconsin, who is speaking at Brookline Booksmith Thursday, is one of our greatest artists. Her comics describe the thrills and loves, the silliness and yearning and loneliness of growing up better than practically anyone else. Maybe only E.B. White’s pitch-perfect, heartbreaking 1952 novel “Charlotte’s Web” surpasses her.

Barry favors the short form – usually comic strips a single poetic page in length. And even when she’s told longer tales they’ve rarely been as long 20 pages. But these pieces accumulate into an expansive story. The place to begin with her work is her 2000 collection “The Greatest of Marlys!” (I’ve reproduced a couple strips here – click on the images to enlarge.) It selects out some of the best of her epic serial tale – told over three decades and hundreds of pages – and like all great serial fiction, part of the attraction is returning to characters you’ve followed for years and come to love.

Her comics of the late 1970s had a prickly patterned style that recalled Chicago’s Hairy Who gang. But by the early 1980s, she found her great subject: growing up. And her style shifted accordingly – her writing looking and reading more like a (fictional) diary, her drawings appearing more childlike. This careful balance of form and content made her art feel more true, more intimate, more alive. 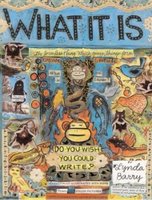 Though her comics were widely published in alternative papers in the 1980s and ‘90s, the comics world only began to accept her in the past decade or so. (The art world has yet to really even notice her.) Many misread her drawing as cruddy and unsophisticated, and complained that her words too often overwhelmed her pictures. It didn’t help that she was one of the lone ladies in what is still a boys’ (and the emphasis is on boys) club. One of the major curatorial disgraces of recent years was when she was left out of the 2005 “Masters of American Comics” traveling exhibit (in fact, the curators didn’t include any women). And she’s one of the many contemporary cartoonists who could have (should have) spiced up the DeCordova Museum’s current “Drawn to Detail” show.

Barry is in town to promote her latest book “What It Is,” which is part memoir, part scrapbook and part how-to workbook, explaining her art/writing process. The overture of the book is a melancholy story about Barry and her husband going for a walk and ruminating on the worries and humiliations that play endlessly in their heads – and ultimately are the wellspring of memory from which her greatness flows.

“There’s a kind of K-Tel collection of my 25 greatest screw-ups of all time. I play that one a lot,” her husband says. “Man, I know,” Barry replies. “I’m still cringing about stuff I said when I was nine.”

Related:
A profile of Barry in The New York Times in May. 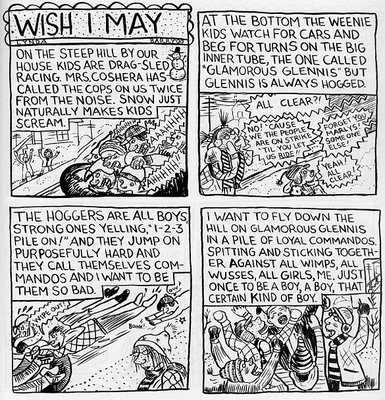