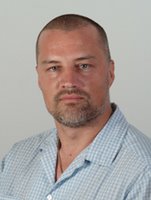 Trevor Smith has been hired as the first curator of contemporary art at the Peabody Essex Museum in Salem, Massachusetts, the institution announced today. Smith arrives from curatorial posts at Bard, where he organized “Martin Creed: Feelings” last year, and New York’s New Museum, where he co-organized the 2005 show “Andrea Zittel: Critical Space.” These are up-to-the-minute shows of major, challenging contemporary artists. Smith’s hiring is another major statement of the Peabody Essex’s aim to be a kick-ass world-class player – this time in contemporary art. Wow.

His degree from the University of British Columbia, Vancouver, was followed by diverse curatorial residencies and graduate studies at the University of Sydney, Australia, and Cité International des Arts, Paris. Based in Australia from 1992 to 2003, he worked first on the Biennale of Sydney and was Curator of Contemporary Art at the Art Gallery of Western Australia. From 2003 to 2006 he was a senior curator at the New Museum of Contemporary Art in New York, where he co-curated the award- winning traveling exhibition “Andrea Zittel: Critical Space.” Most recently, he has been curator-in- residence at the Center for Curatorial Studies, Bard College, in Annandale-on-Hudson, New York.