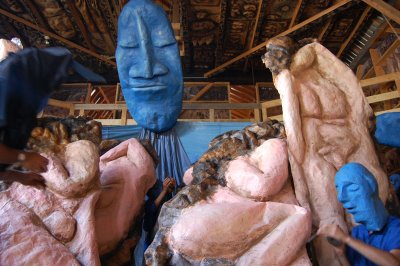 Bread and Puppet Theater founder Peter Schumann discusses the troupe’s circus, “Lubberland” dances (one of which is planned to tour this fall), and what the political theater will take on at the end of the Bush presidency. The theater will march in the Honk Parade from Somerville to Cambridge on Oct. 12 and perform in Providence from Oct. 15 to 19. This is the first of three edited excerpts from an Aug. 12 conversation I had with the 74-year-old at the theater’s farm in Glover, Vermont. Parts two and three are coming soon. 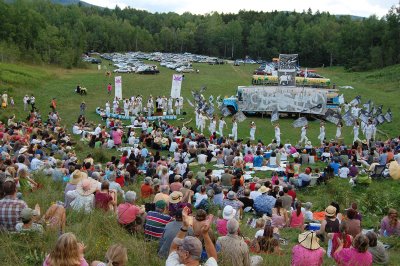 Peter Schumann:
“The circus is something that developed out of the need that many other people come through the theater also and need to find manifestation in the theater. So the circus from the beginning on was something I stayed out of as much as I could. And only when it goes really bad and schlocky and kitsch and so on, I try to radicalize it. And that’s sort of my function. So it’s not like the other pieces, which are clearly designed and choreographed by me, or written and so forth.”

“I do [have a significant hand in directing the circus]. I made the circus from almost from its beginning as something where many people go in different directions and come back with experimental products that then get put under one helmet that is still a choreography. And yet the particles are what makes the circus, it’s odd collection of jokes and politicizing things.”

“Lubberland was my birthday present to myself when I turned 70. Since I had a dance company many many years ago I thought this is the right time to do that again. So probably I was 21 or 22 when I had my first dance company. So I thought now I would pick that up again and make it into separate work, even though there are dances in the pageants and circuses quite often. But I wanted to have something for community to come specifically for that element, to do dance. So we started in that winter, and we started with cold dancing, and then medium cold dancing, and then slowly getting warmer dancing. And that was done in really, truly in the cold in the new building. You had to go through snow banks this deep. You had to go on snowshoes. And we started in there with big fat coats on our shoulders, everybody. And that was the beginning of it. Then it became politicized very quickly. Then we did major political issue dances. So the Israeli attack on Lebanon was one big dance. Now it’s the election campaign. I think we will stick to that theme, even though the dances may change in the summer. They did change already. But that will stick for these last three weeks [of the summer], these dances. Maybe even for longer when we take it on tour.” 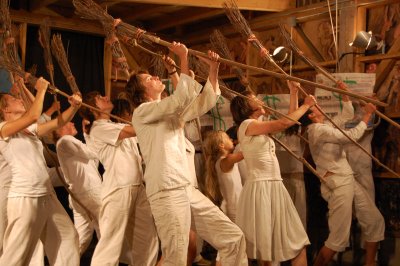 “Taking it on tour is very different from the other shows. Taking it on tour means that either I go or Maura [Gahan] goes, or the two of us together. We don’t need a company for that. We go somewhere and then when we find people who can only hit pots and pans then we do it people who can only hit pots and pans. Or if we find grand piano players, so it will be grand pianos. Whatever we can find will be put into that Lubberland production. So it will be again a fresh start wherever you go. Because it is a construction of movement and sound.”

“Just to separate the dance element more from all the other show-makings. To say: let’s take dance as dance. And the important thing in the Lubberland dancing wasn’t politics, but was really to start from that freest of all elements that is experimental dancing. We started truly with just moving in a room, and then slowly organized that movement into most simplistic possible choreography. So that superceded everything else, that it really came from the dance seemed to be the important part of it and not from first another idea.”

“You move around and in that movement you automatically find extraordinary devices, some things that speed or slow motion or feet or arms provide, the separation of the torso movements to the knee movements. Whatever you come up with arbitrarily will provide you with themes for dances. The dance isn’t guided by the intellectual guidelines that you have in theater making, it has it’s own guidelines. It doesn’t have a vision that you have first and then you go about recreating. It starts with nothing, and then what’s available to you is the untrained body of a dilettante who wants to partake in this general dilettantism. And it is meant to be dilettantic and wants to be and should be. Well it’s the opposite of the professional idea of chiseling something to some form of perfection. That is not desired. Movement is raw and big, and then you eat and shit, whatever you do in your normal life. These movements are elementary. Those elementary movements are neglected movements because they are really utilitarian in normal life. And then when you take them and take them serious, then all of a sudden they reveal they have great chances of being beautiful or being extraordinary or being juxtaposed with something else and have meaning. So it’s an extraordinary feel to be in dance. And that’s what the Lubberlanders want to do: real dancing. If it ends up like political satire that is almost like an afterthought, not the original thought.”

“The politics [in Lubberland] came directly from the titles and not from the dance. The dance itself doesn’t provide political information only the title. … That juxtaposition is lovely to work with. To cheat the audience out of aesthetic enjoyment.”

“The normal person is so overloaded with the desire of over interpreting, and having to connect from one meaning to another. Which in an artist’s work is not the case. That’s not how it is. Art is overwhelmed by unconsciousness, by grand old inside events that don’t fit into that rationalistic thinking at all. The rational modern client sits a little stupefied. If he rids himself of some of the inhibitions that our cultures have, if he sees the fun in it, if he sees the childishness, if he sees a few things that help him to enjoy it he’s lucky.”

What is the theater’s role at the end of the Bush presidency? “To protest the new era that’s coming after the Bush era, which is the same era as the Bush era. That’s what we do. It pretends to be this totally new direction that already it cannot be because of what it says. It’s the sad late stages of this form of capitalism that can’t possibly be longer with us. That will kill us for sure. Unless we get enough population aroused and Lubberized and puppetized and traumatized to rise up against this bullshit and just to stop believing it and pointing out how ridiculous it is. It just doesn’t work, you can’t live in this grabbing style, vis-à-vis the rest of the world. It doesn’t work. You’re going to be suffering for it badly. The most likely thing is the horror of nuclear power and whatever. That seems to be just totally devastatingly near all of us, that there is something happening. The Russians right now are talking about tactical nuclear weapons if American should end up at war with them. So if that would happen then heaven knows what all breaks loose. That’s just one incident. I could imagine that the Israelis do a foolish thing in Iran. Or rather the Americans through the Israelis, that could happen. There are so many points. Look at Pakistan, what Pakistan is up to. It’s all over the world. And we in the Second Vermont Republic strongly advise to immediately get hold of nuclear weapons as the obvious solution to be a respectable member of the community.”

The Second Vermont Republic is “ a utopian movement that pretends to be a little more than that. Which it definitely isn’t. It has totally no chance whatsoever. The easiest way to find out about this no chance is that it isn’t taken serious, because if it were taken serious then there would be police. It’s a foolish proposal that should be taken very serious. It’s part of this utopian design of another world that this existing world will do everything it can prevent, whether it’s Second Vermont Republic or a third party in the United States, or whatever it is. All of these things are in reality impossible, unless there is a revolution.”

“You address yourself in the theater not so much to the existing politics as to all the people who suffer and live in those politics. To the raw participants who don’t know why they are made to participate. And whose participation amounts to this ridiculous off and on voting which doesn’t have much meaning. All this theater and artwork, all this addresses itself to the people who are suffering from this system. And with that trying to loosen up, not only to suffer from the system, but to recognize the system as what it is. And that could then include a standing up against that system. So it’s the beginnings of cultural or the desire for cultural revolution preceding the revolution. Because the revolution has to be preceded by cultural revolution. The minds of masses have to be changed and turned against the existing order in order to achieve anything. And the masses are now solidly in the hands of commercial powers that gain money from having this thing go as it goes.”