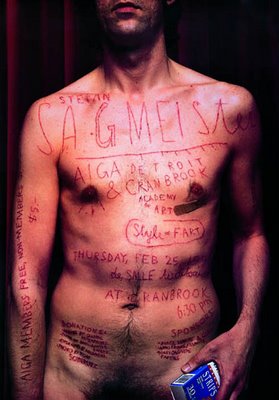 From my May interview with designer Stefan Sagmeister:

You may not know Stefan Sagmeister’s name, but you’ll likely recognize his firm’s lion design for the Rolling Stones’ 1997 album "Bridges to Babylon," as well as album covers for Lou Reed, Talking Heads, and Aerosmith. Design geeks bow before the 45-year-old Austrian-born, New York–based designer’s witty topographical experiments and bad-ass stunts — a poster for a talk he gave in 1999 was a photo of all the event info carved into his chest. His new book, "Things I Have Learned in My Life So Far" (Abrams), collects a series of billboards, magazine spreads, and short videos in which musings from his diary — “drugs are fun in the beginning but become a drag later on,” “trying to look good limits my life,” “assuming is stifling” — were spelled out in flowers, yellow “caution” tape, drink glasses at a party, and chopped-up hotdogs.

What was it like to work with Talking Heads, the Rolling Stones, Lou Reed, and Aerosmith?
All completely different. Aerosmith was by far the most difficult. The worst job I’ve ever done in my life. It had nothing to do with the band. It was much involved with the management at the label. The one-sentence version would be: I’d rather do another 10 posters where I have to cut my breast up than do another Aerosmith CD.