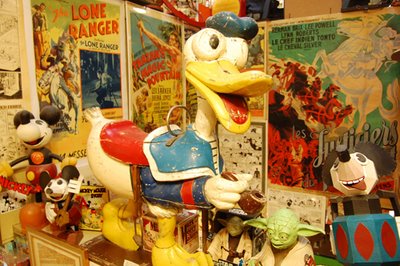 What caught my eye was the big grinning orange face on the sign for “Fawcett’s Art, Antiques, Toy Museum.” It stood outside a nondescript white house alongside a nondescript stretch of Route 1 in Waldoboro, Maine, and depicted a bald, bearded fellow with a vague resemblance to the Wizard of Oz.

The place was deserted when I entered, but chockablock with pop artifacts for sale – books and toys and cartoony paintings. The proprietor, John Fawcett, appeared, a tall, curmudgeonly fellow, whose white-whiskered face was the one on the sign. And for five bucks, he offered a tour of his museum at the back of the store.

It was impossible to see from the shop, over a latched gate, and around a corner into the museum. So I wasn’t quite sure which proud American tradition the museum belonged to – an eccentric’s roadside cabinet of wonders, or a huckster’s bait. 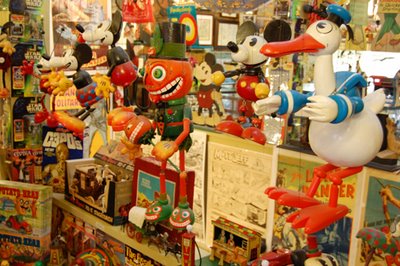 But I paid up, got a little red ticket, and then, wow, it was like stumbling upon some pop culture heaven. The museum was perhaps only six rooms on two floors, but every surface was encrusted with toys and books and posters, most dating to the first half of the 20th century. 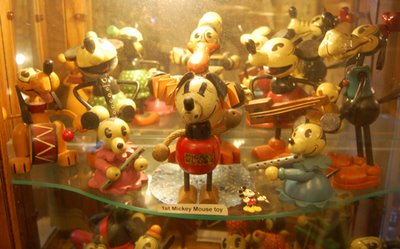 Fawcett claims to present first Disney toys and watches, rare atomic-themed toys, Gene Autry’s pink and yellow satin rodeo shirt from the 1940s, and the duds the radio (!) Lone Ranger wore. It’s a magical dream library of American boy pop culture (almost no Barbies here). There’s so incredibly much good stuff that its very existence feels impossible. The sensation is something like a pop culture version of rediscovering Pompeii. On Route 1 in Maine. 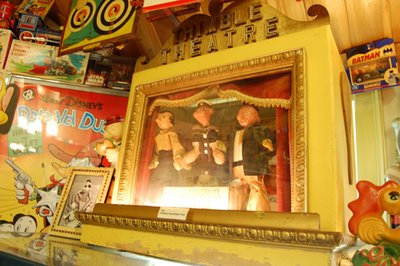 There are dozens of early Mickey Mouses (the scrappy, scamp country mouse from before World War II, before he got all cleaned up and plastic and suburban in parallel with returning war GIs), Popeyes, Lone Rangers, and Felix the Cats. You can see Peanuts characters and Star Wars toys, toy robots, Disney-designed World War II military insignia, a 1930s French Donald Duck carousel figure, pulp paintings, animation cells, tin toys, wind-up toys, and comics pages. Pictures of Farrah Fawcett in her mid ‘70s glory and some little figurines made from lobster shells (this is Maine after all) round out the collection. 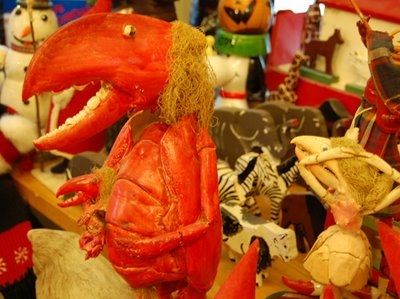 “If it’s here, it’s because I like it,” Fawcett told me. “It’s here for aesthetics, not for nostalgia. It’s the basis of my artwork.”

The 68-year-old grew up in Watertown, Massachusetts, taught art at the University of Connecticut for 32 years, and displays his own artwork on the walls of a gallery in his store. 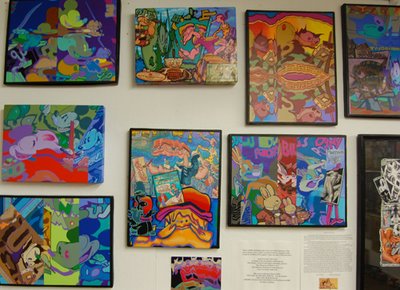 They are trippy pop paintings, toy assemblages and cartoony drawings that look like something that could have appeared in Robert Crumb’s seminal late 1960s “Zap” comics or the ‘60s pop art of Peter Saul or Peter Blake. Fawcett’s work has appeared in Theodore Stebbins’ 1976 book “American Master Drawings and Watercolors” and the 1993 book “The Art of Mickey Mouse” and in the collection of the Whitney Museum of American Art. He insists – correctly – that the treasures in his museum are art too. 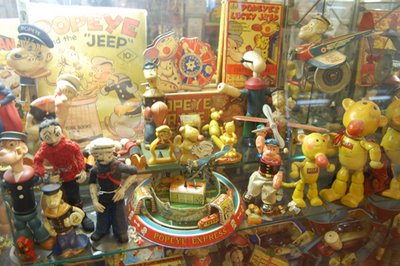 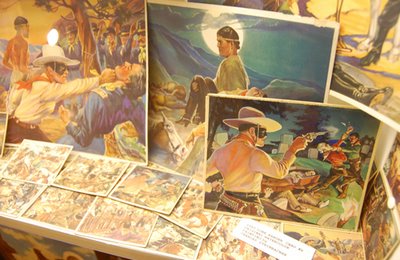 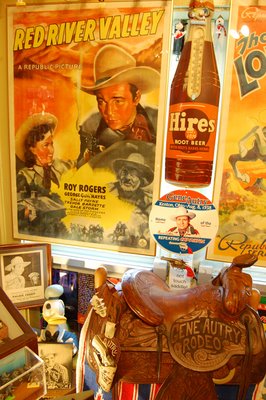