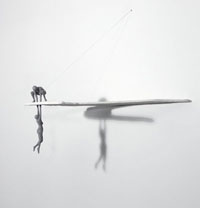 Sally Moore, who resides in Jamaica Plain and was featured in the 2005 DeCordova Annual, builds fragile miniature model worlds of wood and wire and papier-mâché that hang in the air or cling to shelves reaching out from gallery walls. They are precarious, precious islands, linked by ropes and bridges and ladders. Often they have a tentative jury-rigged feel, as if cobbled together by people trying to survive amid ruins.

In the past these “people” have often been absent. But in her exhibition “Edge,” which closed at Barbara Krakow Gallery in Boston Tuesday, little figures appear, naked and gray or hidden under cloaks. Which seems a signal that we’ve entered the land of fables.

In “Dropped/Caught," 2008 (pictured at top), a bald gray naked (clay) lady holds up another bald naked gray lady who dangles dangerously through a hole in their shelf to a bottomless void. In “Approaching Eye Level,” 2007 (pictured at left), a naked bald gray clay lady shimmies up twine hanging from a mobile, and balances out a little bear in a cage and a flying bird on the other side. There’s something fussy and forced about these scenes. The angsty symbolism – especially of the woman holding up her companion – feels too narrowly literal.

“Where It Lives,” 2008 (below), a free-standing tower of wood, wire, cement and mesh, has no figures and is better for it. Because it leaves Moore free to play to her strength: inventing architecture. This work features platforms perched here and there up its nearly 8-foot height, but little shelter. It seems to be a rickety penthouse tower, maybe the lair of “It.” Or perhaps it’s a lookout tower where you watch out for some unmentionable “It.”

There’s a danger in Moore’s sort of dollhouse dreaming of a cloying whimsy – that she doesn’t quite navigate around. For example, I wish I hadn’t noticed that Moore wrote: “I am thinking of the ‘it’ as imagination, itself. Ideas are often born in dark places.” But it’s satisfying to see her move off the wall and wire, and into the middle of the gallery with “Where It Lives.” Its scale resonates with the scale of our bodies, and animates Moore's tension between big and little. It might be cool to see a mini metropolis of these sorts of structures. In the meantime, working off the floor helps ground her sculptural visions. 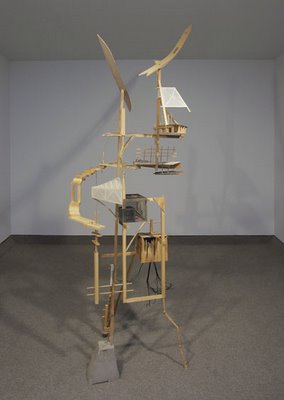