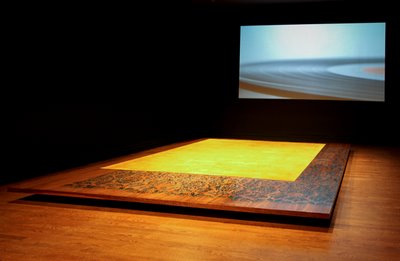 Records are a path to memory in Luxembourg-raised, Berlin-based Su-Mei Tse's “Floating Memories” installation at the Gardner Museum. A wood platform framing a gold silk rug from China stands raised slightly off the floor. The wood is etched on two sides of the rug and filled with shiny green resin in a peacock and floral wallpaper pattern. Projected on the wall above is video of a record endlessly spinning as we hear the crackle and pop of the needle stuck at the end of the album.

Gardner exhibitions alternate between the sensual pleasures of old European and Asian masters and contemporary curator Pieranna Cavalchini's ambitiously difficult conceptual art shows, like this one. I couldn't connect the dots here until Tse herself explained them to me. The record is meant to reflect the way the Gardner feels frozen in time. The platform is inspired by the Gardner's Dutch Room, from which Rembrandt and Vermeer paintings were stolen in 1990. It imitates the look of the still empty frames and a silk damask that formerly covered the walls. "The whole idea is about how to translate the impression of absence," Tse told me. It's a good subject, but few will make the desired connections. And the sacrifice of looks to ideas in this sort of conceptual art makes it almost impossible to tap the emotions elicited by the sad, lonely aura of that looted gallery.

Su-Mei Tse spoke about her installation at a press preview on July 15:

About the rug, she said: “To me to conceive a monochrome was really a way of painting. The whole idea is about how to translate the impression of absence, these empty frames in the Dutch room that really give that strong impression.”
“Nothing is tangible, everything is floating, nothing is fixed.”
“It also has to do with time and loss. The strength of this absence for me had the power to inspire in me the memory of these paintings.”
“There are many inspiring things in the museum. But the fact that it is more abstract is more free to maybe to do something out of it.”
“It’s not about one particular of these absent paintings or objects. If you know which paintings were here, like Rembrandt or Vermeer, and you remember what they are, they are very famous paintings. Everybody has their personal attraction to these paintings. … I think the power of art is when it somehow leaves a trace. They were here and they have a role here.”
On the Gardner keeping on display the empty frames of the stolen paintings: “It’s really powerful I think. Because of course it’s a very sad thing for the museum. But at the same time they are somewhere. They are not dead.”

About the record video: “I see it as a horizon and as a landscape.”
“I like to link things with personal experiences, maybe with personal experiences that everyone knows.”
“For me that’s my very first thing that I have in mind from my [childhood] memory.”
“I saw it from this height.”
“Here it’s more the end, because I feel this museum is kind of on stand by, but looped it continues. … It’s not important what it [the album] is. It should stay open.”
“For me the sound evokes what I could feel in the museum, really the standby of time. … This is really like a time stop, but it still turns, the end still turns.” 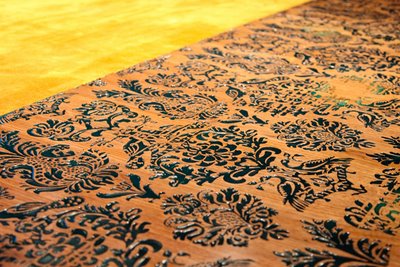