From my review of Frank Lloyd Wright's Zimmerman House in Manchester, New Hampshire:

The Currier Museum in Manchester, New Hampshire, offers tours of Wright's 1950 Zimmerman House, which was willed to the museum with its furnishings intact in the 1980s. (Tours begin at the Currier, April through December; advance reservations are required.) It's a striking example of Wright's vision, as the Zimmermans had him design everything inside and out and even consulted with him about dishes and art.

The long, low, single-story horizontal structure is typical of Wright's later work. The front is red brick topped by a bank of concrete-framed windows; it looks like a cross between a Japanese temple and a Modernist bunker. But his design opens up on the back side, which seems to be nearly all glass, with views of the lawn, plantings, and trees. The lot is smaller than an acre, but the trees suggest a deep wood while screening the interior from neighbors.

All photos courtesy the Currier Museum of Art. The two interior shots are by Harkins Photography. 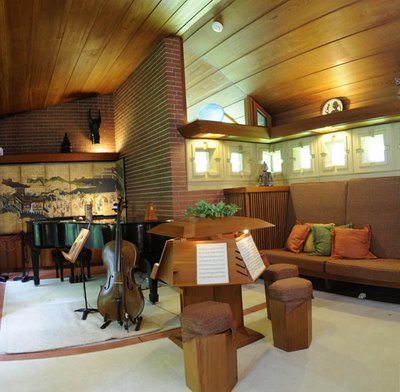 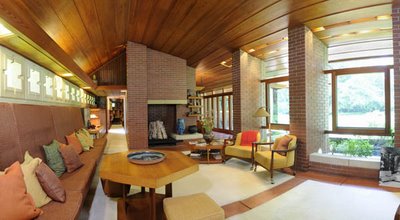