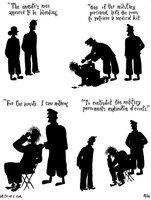 Greg Cook, the editor of The New England Journal of Aesthetic Research, has a new comic, “What We So Quietly Saw,” in the documentary comics anthology “Syncopated” edited by Brendan Burford. Here are some reviews:

“Special mention must be made to Greg Cook’s interpretation of FBI reports about treatment of prisoners Guantanamo Bay. Through his use of silhouettes he’s able to avoid ramped-up melodrama or self-righteous indignation and cut right to the quick of the horror of the situation. It’s shoe-in for ‘best short story of 2009.’” – Comic Book Resources.

“The hammer is Greg Cook’s ‘What We So Quietly Saw,’ a stark account of torture at Guantanamo in which the word ‘redacted’ has the power of a scream.” – The Boston Globe.

“Greg Cook has taken material from the FBI's oral histories of Guantanamo Bay and created a narrative, illustrated in silhouettes. We see a hapless figure beaten and forced to watch a woman squat over a Koran; then he lies frozen, shivering on the ground. ‘Most times they had urinated or defecated on themselves, and had been left there’ – words without the human form would not convey the horror, but realistic images would be a further violation. Shadow figures may be the most dignified way to narrate torture.” – Los Angeles Times.

“Greg Cook’s ‘What We So Quietly Saw’ is anything but traditional, using only silhouettes to tell selected stories from inside Guantánamo Bay.” – Publishers Weekly.

“Merely an illustrated series of quotes from FBI reports about the treatment of Guantanamo Bay prisoners.” – Newsarama.

Great notices Greg. I read “What We So Quietly Saw,” on your website and it was haunting

Thanks for the kind words, Todd.