“Dove/O’Keeffe: Circles of Influence” at Clark 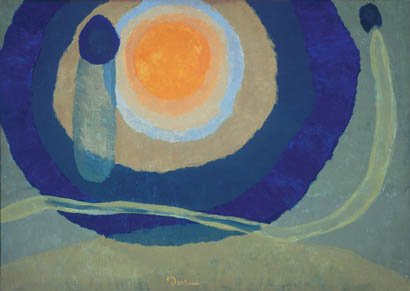 “The way you see nature depends on whatever has influenced your way of seeing. I think it was Arthur Dove who affected my start, who helped me find something of my own.” – Georgia O’Keeffe in the early 1960s.

Georgia O’Keeffe found her own way of abstracting nature through Arthur Dove, argues the exhibition “Dove/O’Keeffe: Circles of Influence” at the Clark Art Institute. And then her art influenced him right back.

Dove was recognized early on as a pioneering American Modernist in books like Arthur Jerome Edy’s 1914 survey “Cubists and Post-Impressionism.” A copy of the text is here open to a reproduction of a Dove wiggly abstraction of leaves. O’Keeffe had the book, was inspired by Dove’s distillation of nature, and so tracked his art down in exhibitions. They met in 1918, introduced by O’Keeffe’s boyfriend, the photographer and gallerist Alfred Stieglitz. Stieglitz had been showing Dove’s work since 1912 and O’Keeffe since 1916.

Debra Bricker Balken, an independent curator who organized the exhibit for the Clark, makes many sharp pairings, like Dove’s “Abstraction No. 3” (1910/11) with O’Keeffe’s “No. 24 – Special/No. 24” (1916/17). His painting contrasts abstracted black tree branches against a river running through gray green hills. Her colors (grays, blacks, greens), dense painting handling, and fuzzy forms echo his.

But most of the pairings group earlier O’Keeffes with later Doves, suggesting – it’s not clear here how correctly or not – that this is mostly a story of influence flowing back from her to him.

Her early soft, flowing, abstracted watercolors are explosively vivid – like her 1916 watercolor “Sunrise” (above) of a yellow rising sun radiating red and pink halos that bleed one into the next. She freights the hot colors with the feeling of awe one might have before wide open wild spaces. It’s paired with Dove’s 1936 tempera “Sunrise I” (at top), which looks like a fried egg (in a good way), surrounded by ochre and blue halos, floating above an abstracted green hill. Her edges bleed, his are feathered. Two blue flares with green tails flank the egg-sun. It’s one of his best works, in part because of his careful patterning of the densely scrubbed on colors. The hues are cooler than O’Keeffe’s, but still give off a thrilling burst of energy. It’s a reworking of the same motifs that Dove used to strong effect in “Fog Horns” from 1929 (below), which features what look like three violet roses hovering in a gray sky above white hills.

Then O’Keeffe’s 1926 painting “City Night,” of a glowing white full moon seen down a canyon of skyscrapers, seems a precursor of Dove's 1930 painting “Silver Tanks and Moon” of a glowing full moon glimpsed between tall silver towers.

Dove experimented with materials in a way that O’Keeffe never did. His assemblages like “Rain” (1924), which O’Keeffe owned at one point, bring to mind German Dada. Actual willow branches arch across the shimmering metal background inside a shadowbox to evoke the title. But generally her paintings are fluid; his are clotted. She has a lighter, fleeter touch. His colors tend to be grayer, darker, more subdued.

As O’Keeffe edges into more realistic pictures, her work sings. In “The Lawrence Tree” (1929), you stare up, following brown branches squiggling into a leafy canopy that obscures a starry night sky. In “Jack-in-Pulpit—No. 2” (1930), white stripes crackle like electricity across the brown leaves around the jack, and clouds of green leaves surround the whole thing.

O’Keeffe comes out ahead. Dove found biomorphic abstraction first, but seemingly got stumped by where to go next. In his watercolors from the 1930s, he seems adrift – the striking particularity of his earlier forms melting into generic train cars, mountains and suns. O’Keeffe can get cutesy, illustrative and stiff. But here, at the start of her career, mainly you sense that O’Keeffe recognized what Dove had achieved, picked it up, and ran with it. And ran with infectious joy.

Previously:
“Wadsworth acquires an O’Keeffe; Plus how photography made O’Keeffe a star.” 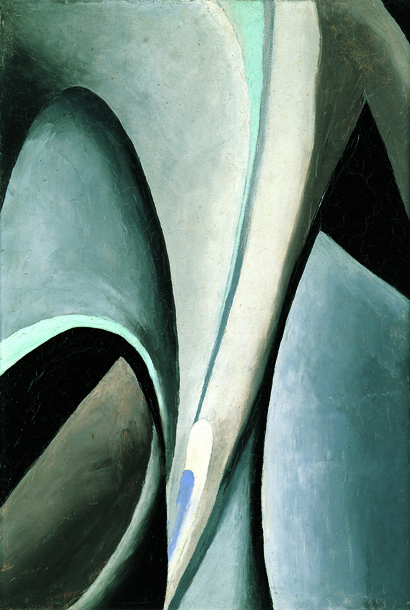 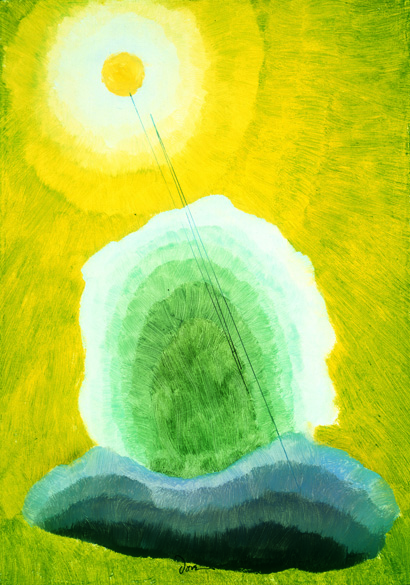 Thanks for writing this, Greg, so I didn't have to. Like you, I was also struck by the odd timeline of the works displayed - the dates seemed to actually disprove the implied thesis of the exhibit, i.e. that Dove mentored O'Keefe. That may be true, but that's not what the pictures in the show seem to demonstrate; you would instead glean from the works assembled that Dove was straining to catch up to O'Keefe, and fell further and further behind.

It's worth noting that the Globe's Sebastian Smee has just written on the Prendergast exhibit over at Williams, which to my mind he overrated. But maybe I'll get around to that on my own blog!