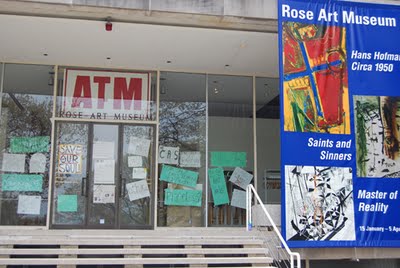 Brandeis reports that it increased the operating budget for its Rose Art Museum by $200,000 this summer. A spokesman for the Waltham school says that’s on top of the $400,000 that was budgeted for the current fiscal year, FY 2010, which coincides with the current school year.

That sounds like a big increase – but it still leaves the budget down by more than 40 percent from previous years. It might be more accurate to say that Brandeis is not slashing the Rose budget by as much as it says it planned to slash.

Any Brandeis budget numbers are difficult to come by, but Rose “operating budgets” seem to have been around $1.1 to $1.5 million in recent years. However, these numbers may under-represent the entire annual cost of running the Rose as it seems that they may not include Rose utilities costs and the cost of insuring the museum’s collection.

The school’s Future of the Rose Committee seems to be speaking about this “new” $600,00 Rose budget when it wrote in its Sept. 18 report: “At approximately half of the 2009 Rose budget, the 2010 budget is projected to support the current Rose employees, with a modest sum for exhibitions and other operating expenses, and with about $200,000 available for the implementation of the recommendations contained in this report.”

The committee’s key spending recommendation is to rebuild the Rose’s staff, which is down to two people from six or seven (two people were pushed out this summer, another left on her own at that time, other positions had been left open last year).

“There has not been a decision about specifically earmarking this additional funding,” Brandeis spokesman Dennis Nealon tells The New England Journal of Aesthetic Research. “The university, knowing that the Future of the Rose Committee was going to be issuing recommendations, added the funds to the museum budget proactively. The Board of Trustees later this month, during its regularly scheduled meeting, will take up the committee report and, together with the administration, will review the committee's recommendations and the administration will decide on a course of action for those recommendations.”

Whatever you want to call the change in the Rose budget, it seems that in the short term Brandeis is having to cover more of the cost of running the Rose itself as donations from Rose Overseers and outside gifts to the Rose have fallen off. Some say donations for the Rose have disappeared completely, while the Future of the Rose Committee reports that Brandeis leaders are more optimistic: “The current budget projection for the Rose for fiscal 2010 is for income of about a quarter of the approximately $1,000,000 Rose income for fiscal 2009, plus a University subsidy that will bring the fiscal 2010 income to almost half of the fiscal 2009 income.”