Cops attend too, while Brandeis board meets 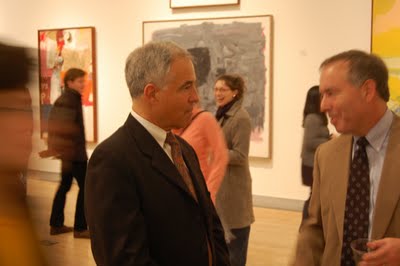 Dozens of visitors protested Brandeis University administrators’ January threat to sell off the collection of its Rose Art Museum – or at least parts of it – by wearing buttons reading “Save the Rose” to the opening of “The Rose at Brandeis: Works from the Collection” exhibition at the Rose tonight. A couple people wore T-shirts with the slogan. But it was a polite, silent protest. No signs, no shouting.

Brandeis and Waltham police (note the fluorescent yellow coats in the photos below) guarded the museum entrance and roamed the galleries – which I’d never noticed at Rose events before January. A Brandeis police car was parked out front with red and blue lights flashing all evening. Brandeis President Jehuda Reinharz (pictured at top) and Brandeis Board Chairman Malcolm L. Sherman (pictured below with the red tie) of Wellesley were among the few hundred people who attended the reception. 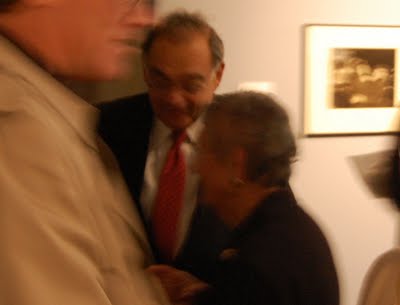 Brandeis’s Board of Trustees was scheduled to meet tonight. University spokesman Dennis Nealon tells me by BlackBerry: “I know of no board business pertaining to the Rose at this time.” Which is curious, because Brandeis Provost Marty Wyngaarden Krauss wrote in a Sept. 22 email to the Brandeis community that “The report [of the Future of the Rose Committee] will be discussed at the meeting of the Executive Committee of the Board of Trustees this week and at the meeting of the full Board of Trustees scheduled for October 28-29.”

I heard that Jerry Samet, a Brandeis philosophy professor for nearly 25 years, who chairs the 11-member Future of the Rose Committee, presented the committee’s report to the board tonight. And I heard that Roy Dawes, director of Rose Museum operations, spoke at the meeting. But maybe I heard wrong.

“The Rose at Brandeis” exhibition itself is a strong survey of the museum’s collection. The section of the show devoted to the late ‘50s and ‘60s is great, particularly the de Kooning, Gottlieb, Rauschenberg, Kelly, Warhol, Lichtenstein, and an Alex Katz portrait of his wife Ada. There's also a very good 1922 Beckman cityscape. This is the work most in danger of being sold off by Brandeis leaders. And when you think of works in the collection that aren't in the show – like Hyman Bloom’s corpse painting, a Bruce Conner assemblage painting, a Hans Hoffman painting, a giant Matta, a giant Guston, drawings by Otto Dix, Matisse, George Grosz – it’s hard not to fret for their well being. I’ll address the art more when I review the show next week. 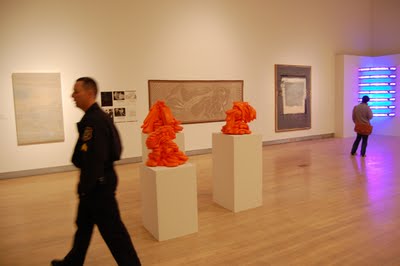 Pictured at the opening reception from top to bottom: Brandeis President Jehuda Reinharz; Brandeis Board Chairman Malcolm L. Sherman; a Waltham policeman in the gallery; the crowd; Evan Parks, a Brandeis senior who worked as a gallery guide at the Rose for two years; Francine Miller, a Brandeis graduate and longtime New England-based critic for Artforum who is writing a book about the crisis at the Rose; a police officer out front of the museum; two officers out front; and the crowd at the front of the museum with the same two officers. Photos by The New England Journal of Aesthetic Research. 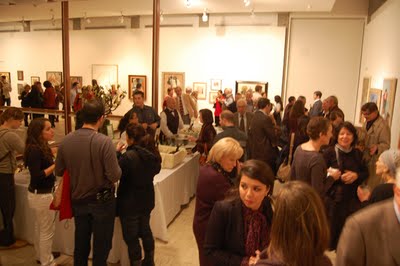 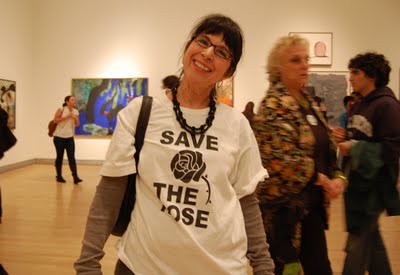 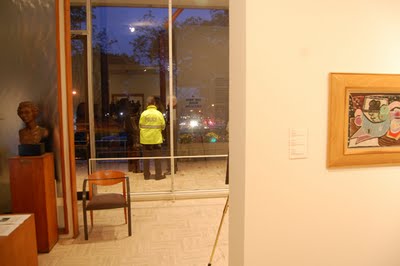 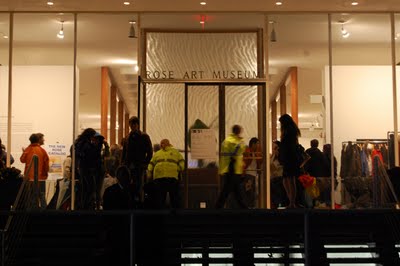 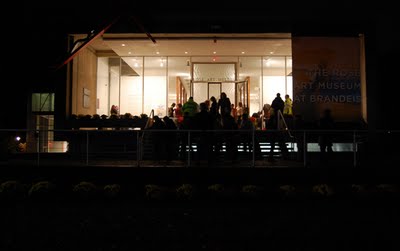