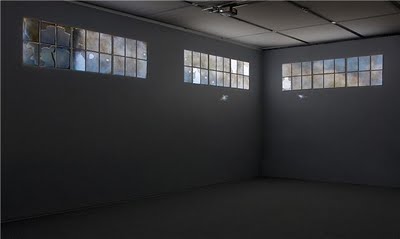 From our review of Krzysztof Wodiczko’s “ …Out of Here: The Veterans Project” installation at Boston’s Institute of Contemporary Art:

For the majority of us Americans, Iraq and Afghanistan are a series of news-data points — number of Americans killed today, number of car bombs, spending tallies, estimates of civilian deaths. We connect these dots to try to form a hazy picture of Iraq, where at least 4276 Americans have died and 30,182 have been wounded and as many as 93,793 Iraqi civilians have been killed since we began our fight there six and a half years ago. 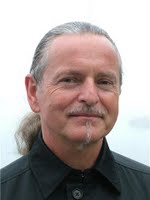 Stories with intimate details can help us to understand. Recent studies have shown that being in pain and watching someone else in pain activate similar areas of the brain. But most of our war reporting is data, not narratives. That’s what makes Krzysztof Wodiczko’s new video installation, “. . . Out of Here: The Veterans Project,” at the Institute of Contemporary Art, so powerful, and so necessary.

You stand in a large dark gallery lined with (projections of) grimy factory-style windows 13 feet above the floor that show blue sky and blurry clouds. “Outside” you hear kids playing, giggling. Adults call to them in what must be Arabic. A radio broadcasts Barack Obama telling us that “we need to use diplomacy to resolve our problems wherever possible” and a report that “a senior Hamas official has told Al Jazeera that this is a Martin Luther King moment.”

A man sings in Arabic as a helicopter — seen in silhouette in the windows — whumps down and hovers. The darkness and the height of the windows make you feel cut off, blind, but also safe. Kids kick a soccer ball past a window, then aloft again; it shatters one of the panes.

Pictured: Krzysztof Wodiczko, “…Out of Here: The Veterans Project,” 2009, Courtesy of the artist and Galerie Lelong, New York. Portrait of Wodiczko by Ewa Harabasz. 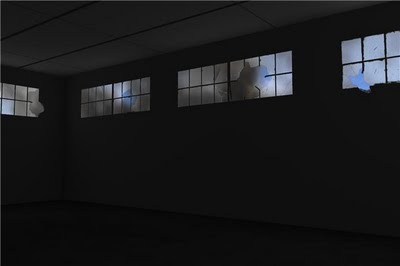