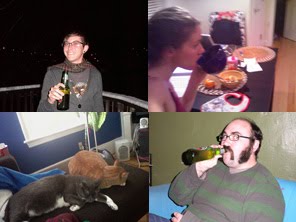 On Monday, the Institute for Infinitely Small Things sent out this witty invite: “Don't Join Us in Copenhagen Because We Are Not There. Contribute photos of yourself not in Copenhagen! in conjunction with UN Climate Change Conference in Copenhagen, Denmark.”

The point, as the Boston-based art collective noted, was “to not release at least 38,575 kilograms of CO2 into the air by not traveling to the UN Climate Conference. The amount of energy we are saving in fuel could feed 150 people for a year or power 325 60w lightbulbs turned on continuously for a year. Not to mention that the Institute for Infinitely Small Things really likes to stay home and drink tea or beer (depending on which members you talk to).”

The Institute makes some of the most interesting – and acidly funny – art in New England, but at times, as here, it adopts a disappointing nihilism. In this case, the Institute skewers the absurdity of people burning up so much fossil fuels to go to a conference about the dangers of burning fossil fuels. But the logical conclusion of this thinking is that the conference shouldn’t happen at all. Is that what the Institute is proposing?

Another example of this nihilism was the Institute’s report on a disaster drill that simulated a suicide car bombing for firefighters, police and other first responders in downtown Providence in November 2006. “While most of production’s special effects and props were very well done, spectacular even, I would not recommend seeing a Disaster Drill for the mere performance of a disaster,” Instituter Jaimes Mayhew’s reported at Big Red & Shiny. “The acting was terrible, which completely ruined the somewhat convincing art production values of the performance.” The idea of reviewing the drill this way is funny and brilliant – hallmarks of the Institute’s work.

But Mayhew went on to complain that the area for the drill was closed to non-participants. “For a disaster, this idea of a secure area defeats the purpose; it completely negates the chaos that is an essential part of a disaster under the presumption that practicing for disaster will make us more secure. It is, in fact, this brand of security as control in the Drill that perpetuates insecurity and fear.”

After the joking, the Institute is saying that drills like this are not only ineffective but part of government propaganda to promote fear among the citizenry. Certainly the Bush Administration – which was in power when this drill occurred – made efforts to stoke fear among Americans. But to argue that preparing first responders for disaster is primarily a propaganda exercise shows that the Institute has trouble distinguishing between jerks and imperfect efforts by people working to do good within a flawed system. By the Institute’s logic, for example, surgeons should never train because training would (1) not stop people from getting sick and (2) scare people into thinking that they might somehow one day become ill enough to require surgeons. In other words, doing nothing is better than doing something well-intended but not perfect.