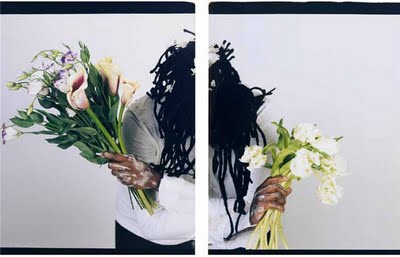 Maria Magdalena Campos-Pons continues to explore her own identity while also engaging with current American politics in her exhibit “Hope: Yes We Can” at Bernice Steinbaum Gallery in Miami. The Cuban-born, Brookline, Massachusetts-based artist’s recent Polaroids stand at the crossroads of photography and performance and painting. They seem to document rituals of celebration, self-discovery, mourning.

“Prayer for Obama II," 2008, (pictured at top) shows Campos-Pons holding flowers and bowing. It was photographed on the morning of Nov. 4, 2008, the day Barack Obama was elected president. (Campos-Pons hosted an election results watching party at her GASP Gallery in Brookline that night.) The gallery notes a detail: “A tiny finger-puppet of Obama, given to her as a good luck gesture by a friend, is cradled in the palms of her hands and wrapped in purifying garlic, playfully anchoring the seven images.” In contrast, “Mourning Bouquet” (2008) uses exotic, midnight-blooming flowers to memorialize the death of soldiers in Iraq.

“My Mother Told Me I Am Chinese: Painting Lesson” (2008) speaks, the gallery says, of Campos-Pons’s “Chinese ancestry from her mother’s grandmother who came to Cuba with other Chinese contract workers in the mid 1800’s and worked in the tobacco and sugar cane fields alongside Africans, many of whom were still enslaved. … The white make-up on Campos-Pons’s face in this work alludes to the costume worn in traditional Chinese style theater, but rather than imitating the idealized porcelain doll appearance, the artist applies the paint in broad strokes that dries unevenly, implying both an inexactness to her own heritage as well as making reference to the paint called cascarilla that was used in the ceremonies and initiations of Santeria.”

Previously:
Our 2009 interview with Maria Magdalena Campos-Pons.
Our 2007 profile of Campos-Pons.